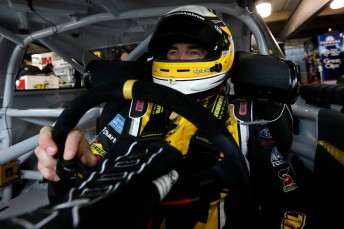 Marcos Ambrose will face the first of three opportunities to qualify for the Sprint All-Star race at the Kansas Speedway this weekend.

The Australian must either win at Kansas, finish in the top two of the Sprint Showdown or rely on fans to vote him in to make the field for the All-Star race at Charlotte.

Contested by those without a guaranteed entry to the All-Star, the Showdown will be held at Charlotte in the lead-up to the $1 million race.

Ambrose had enjoyed automatic entry into the All-Star last year due to his win at Watkins Glen in 2012.

The fan vote, meanwhile, is run through the NASCAR website and provides one last chance for a start.

Danica Patrick won the prize last year and will be a heavy favourite to repeat, should she need the entry.

Ambrose has put together a unique proposal to fans, however, promising to pay $25,000 to children’s charity Victory Junction should he be voted through.

The figure matches that which he was fined for punching Casey Mears following a recent race at Richmond.

“We are trying to get into the Sprint All-Star Race, and we had a lot of fan support the past few weeks,” Ambrose said.

“We wanted to do something to show our appreciation, so that’s why we will pay the fine forward to Victory Junction (children’s charity).

“We announced it yesterday and people have been pretty excited about it. They have been voting a lot.

“We have some stiff competition with Danica in the voting, but we want to do something cool for the kids at camp. It’s great to see everyone rally around this.

“We are going to pay the fine forward if we race in, too.

“We have a chance this weekend at Kansas. We spent time this week testing at Charlotte, so hopefully we learned more about the downforce tracks.

“We need to get a little better there. Kansas is a great track. It’s racy, and you see good racing there.

“Hopefully, we can have a good race because we want to stay up front in points too.

“We didn’t lose anything in Talladega, so we are still in position to get into the Top-15 after this weekend.

“That would be nice going into the All-Star weekend.”

Ambrose is currently lying 16th in the points with the Chase for the Sprint Cup rules modified this year to include 16 drivers for the final 10 races of the season.