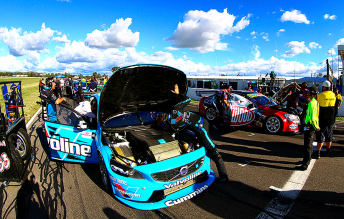 V8 Supercars is currently undertaking a global search for a category technical director amid efforts to combat ongoing frustrations over parity.

The new recruit will work alongside motorsport department chief Damien White, assuming responsibility for the category’s technical policies and processes.

The championship has not had a dedicated technical director since 2009, when now Dick Johnson Racing sporting director Campbell Little spent a brief stint in the role.

V8 Supercars’ James Warburton admits that the championship has been “playing catch-up” to strengthen its technical department since he stepped into the position of CEO 12 months ago.

“We’ve already interviewed a few people and we are continuing our search,” Warburton told Speedcafe.com when asked of the technical director position.

“When the position will be in place will depend on the individual, but basically they’ll be on foot to give Damien the support he needs.

“There is an enormous amount of work in policy, rule making, managing the events, etc.

“We just need to resource-up in the right areas and I think that it’s only going to get more complex as we go with potentially what we might do in the future.

“I come from a commercial background, but I understand the principles of what we need to achieve and we need the right resources in place.

“I identified that quickly and that’s what’s going to change.”

Aerodynamic and engine parity have both been under the spotlight during the opening phase of the category’s second season running its Car of the Future regulations.

The year began with a troubled January aero homologation test that saw V8 Supercars fail to replicate the downforce numbers seen on the ‘benchmark’ Ford Falcon the previous year.

That resulted in the establishment of an aerodynamic committee and a pledge from the category to “recheck our tools” by undertaking more straightline testing with the Ford and Holden this month.

Although the situation leaves some doubt over the legitimacy of all the aero packages benchmarked against the Ford in both 2013 and 2014, V8 Supercars has so far resisted calls for more homologation running.

Equally heated disputes have been taken place during recent months over engine parity as teams try and reach the increased performance benchmark released prior to Symmons Plains, while adjusting to the centre-of-gravity rules now in place for Perth.

While noting the importance of sound technical processes, Warburton insists that the spread of winners this season ensures that the category is in a “comfortable” position.

“You can’t sanitise things to any one degree and the reality is that most category’s in the world would give their left and right arm for what they’re seeing out there at the moment.

“If I look back over the last 20 years on all the various headlines across it (parity), there will always be competitive tension.

“Everyone (team member) who walks in the gate believes they’ll walk out covered in champagne. That’s the competitive pressure of it, and that’s what we’re all about.

“We’ve got to be able to answer the questions and show that we’re policing it in the right way,” he added.

“Sometimes decisions will be unpopular but the reality is that what we’re putting out there and what the fans are turning out to see is an extraordinary category.

Next Story Webb back behind the wheel at Tekno test