BMW’s Marco Wittmann secured his maiden DTM victory with a commanding drive in the season opener at Hockenheim.

The 24-year-old German grabbed the lead from pole sitter Adrien Tambay on lap two before proceeding to build a healthy gap on the option tyre.

Witmann continued to extend his advantage on the prime tyre with the RMG driver taking the win by 12.8 seconds from Matias Ekstrom, who produced a strong second stint on the option rubber.

Tambay came home in third for ABT Audi with reigning champion Mike Rockenfeller fourth and Timo Glock in fifth.

Pascal Wehrlein was the top Mercedes in 11th, while Paul Di Resta finished in 14th on his return to the series.

Pirtek Racing’s Andrew Jordan extended his British Touring Car Championship lead after a strong weekend at Thruxton highlighted by a victory in race one. Starting from pole, the privateer Honda Civic driver managed to fend off a fast starting Mat Jackson before being chased home by the works Hondas of Matt Neal and Gordon Shedden.

Shedden and Jordan went head-to-head for the honours in race two with the Scotsman coming out on top. The factory Honda driver slipped by Jordan, who was carrying 45kg of success ballast, at Church corner before taking the flag.

Turkington won the dramatic final reverse grid race which was built upon a superb start from the third row of the grid.

Motorbase’s Jackson led the early stages before the BMW driver surged into the lead at Village corner.

An accident involvingOllie Jackson and a huge crash from Simon Belcher brought out the Safety Car on two separate occasions.

However, Turkington made no mistakes on each restart as he crossed the finish line ahead of the Motorbase duo of Jackson and Fabrizio Giovanardi. The Italian came under intense pressure from works Honda driver Tiago Monteiro but the reigning Superstars champion held on despite being tapped by the former F1 driver on the final lap.

In the end, Morbidelli took the flag from Monteiro with Hugo Valente in third. Tom Coronel was fourth ahead of Citroen’s Yvan Muller and Jose Maria Lopez.

Reigning champion Muller recored his second win of the season with a dominant performance in race one. Citroen team-mate Lopez was second with Monteiro in third.

Lopez continues to lead the championship from Muller with Sebastien Loeb third after he secured two top finishes. 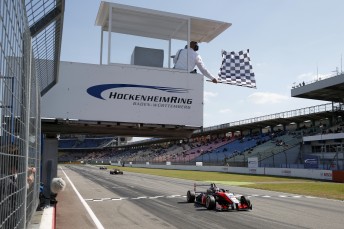 The son of former F1 driver Jos Verstappen became the youngest ever race winner in the championship’s history, as the 16-year-old led home Esteban Occon and Antonio Fuoco in race three.

Mucke Motorsport’s Lucas Auer dominated race one as he took the chequered flag from Jones by 7.120 seconds. Jordan King secured the final spot on the podium.

Australia’s Mitchell Gilbert picked up his first points finish of the season with a sixth place in race one.

Brown and van Overbeek hunted down Wayne Taylor Racing’s Jordan Taylor after the second set of pit stops before moving into the lead in the final third of the race.

van Overbeek managed to open up a 5.8 second lead over the Taylor at the chequered flag with Scot Pruett in third for Chip Ganassi.

Antonio Garcia and Jan Magnussen Corvette starred in the GTLM class as they took the top honours.

Watch the opening DTM round at Hockenheim below

Watch highlights from the WTCC at the Hungaroring