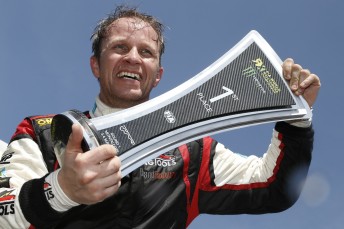 The 2003 WRC champion made no mistakes after qualifying on pole for the final in front of a packed Montalegre circuit. The Norwegian led the six lap final from start to finish with fellow countryman Andreas Bakkerud coming home in second, while Reinis Nitiss was third.

Solberg, who progressed to the semi-finals after finishing second in the heats, made light work of his semi-final with a victory by three seconds over Toomas Heikkinen.

His run continued in the final despite suffering an initial slow start. However, the WRC star’s Citroen DS3 Supercar recovered to lead into the first corner where he stayed after he elected to take his mandatory joker lap on the final tour.

“I am overwhelmed, it is like a dream,” said Solberg,

“I have been fighting for a victory for a long time so it is fantastic to finally get this win.

“It’s like winning my first ever rally again and I’m sure even my mum and dad are proud of me!” 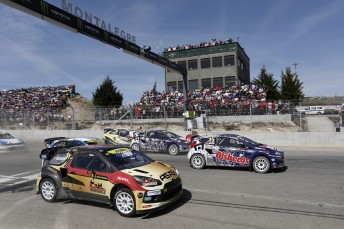 Reigning European Rallycross Champion Timur Timerzyanov failed to make the final despite finishing on top of the Intermediate Classification after the four qualifying heats.

The Russian finished fourth in his semi-final just one position outside the places eligible to secure a final berth.

Meanwhile, former Formula 1 world champion Jacques Villeneuve endured a tough start to his rallycross career as he finished 17th after the qualifying heats, with only the top 12 progressing to the semi-finals.

The French-Canadian picked up a puncture in heat two and missed heat three altogether with a water leak. His repaired Albatec racing Peugeot 208 returned to action in the heat four but he was held in traffic.

“This weekend has been like an appetiser and even though it hasn’t gone to plan, I’ve learned a lot. I’m very happy with the Albatec Racing team and now we have more time to prepare for the next round at Lydden.”

The FIA World Rallycross Championships heads to Great Britain’s Lydden Hill for Round 2 on May 24-25.