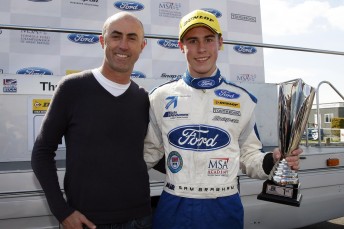 Sam Brabham secured his maiden car race win after taking two victories in Round 3 of the British Formula Ford Championship at Thruxton.

The son of accomplished sports car racer and ex Formula One driver David Brabham, proved to be the man to beat at Britain’s fastest circuit as he claimed two pole positions, two victories and a fifth place finish from the weekend.

Brabham’s Thruxton meeting began with an impressive performance in qualifying which saw him take pole position for the opening and the final encounter of the weekend, broadcast live on UK television.

However, the 19-year-old’s maiden car race win proved to be a tricky one. First he had to fend off his Joe Tandy Racing team-mate Jayde Kruger at the start and then a hard charging Harrison Scott.

Chris Mealin’s high speed accident brought out the Safety Car for six laps but despite the interruption Brabham stayed calm to take the chequered flag from Scott by half a second.

“I’m so pleased finally to have won my first race. Now to win some more,” said Brabham

“I wasn’t too worried when the safety car came out because I knew I had the pace to stay in front. I just needed to get a good restart and I did so. Harrison was giving me a hard time the whole race and I had that pressure.”

After finishing fifth in race two, Brabham ended his weekend on a high by producing another lights-to-flag victory in the final race. 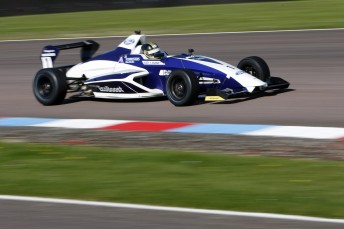 Team-mate Kruger put the teenager under intense pressure throughout the 17 laps at the Hampshire venue, but he refused to buckle as he took the flag for the second time in his career.

“I got a good start and controlled the race,” added Brabham.

“I knew that the fuel would be marginal and I had to try to save some, so I backed off when I could, and everything worked out perfectly. Lights to flag again – I can’t complain.”

Brabham’s double victory sees him occupy sixth in the championship standings, 14 points in arrears of fifth, ahead of the series’ visit to Oulton Park on June 7-8.