Hamlin wins under yellow at Talladega

Hamlin wins under yellow at Talladega 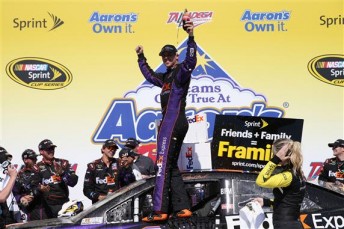 Denny Hamlin has won an action-packed Aaron’s 499 at Talladega after many of the stars took big hits on the Superspeedway.

Hamlin’s first win at the famed Alabama track also marks him as the eighth different winner in 2014.

Since placing second in the season-opening Daytona 500, Hamlin had just one other top-10 finish (sixth at Bristol) in the first nine Sprint Cup Series races of the year.

He beat home Greg Biffle as the caution flew as the leaders had just started the final lap for debris after an accident mid-pack at the start/finish involving Justin Allgaier.

However, he was towed to the garage after being collected by a wreck on the 175th lap involving Jimmie Johnson and Ricky Stenhouse Jr. Kurt Busch, David Ragan, Michael McDowell and Reed Sorenson.

Early in the day, a three-wide battle for the lead resulted in Brad Keselowski wrecking onto the apron after a nudge from the No. 10 of Danica Patrick. 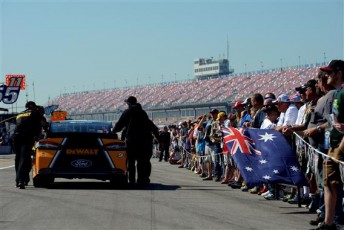 Keselowski’s car also touched off a 14-car wreck with 50 laps to go in the race. Frontrunners Jeff Gordon, Matt Kenseth, Kyle Busch, Tony Stewart and pole-winner Brian Scott were among the drivers collected.

“I just spun out in front of the whole field,” Keselowski said. “I don’t know why, if I just busted my butt on my own or lost a tire, but I feel bad for everyone that got torn up.”

Australia’s Marcos Ambrose was in the mix and even led the race at one stage.

He decided to drop back with around 40 laps to run and cool the engine for a final blast.

Although he was either in front or well out of the way of the wrecks, Ambrose was caught out of position when the late cautions flew and re-packed the field.

Ambrose tried to hook-up with his Richard Petty Motorsports team-mate Aric Almirola on the final two-lap dash but they got separated.

The final caution after the white flag ruined any further hopes to move forward.

VIDEO: The big one triggered by Keselowski