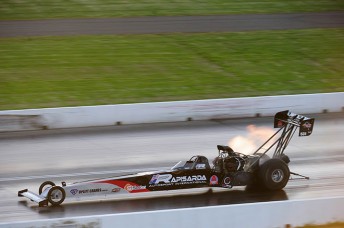 Perth racer, Allan Dobson has taken the ANDRA Top Fuel Championship points lead from Phil Lamattina after taking his third round win in succession at the X-Champs in Sydney.

With the format returning to the traditional qualifying and eliminations, Dobson took his Rapisarda Autosport International dragster to the final against John Lamattina after beating Mark Mariani in the semis.

He was able to blast home past the impressive younger Lamattina brother in a repeat of their Willowbank final matchup to take the win.

In Top Doorslammer, another Perth racer in John Zappia elevated himself to the top of the points chase by taking the Striker Crushing/Fuchs HQ Monaro to victory lane. He got to the final by taking out old rival Victor Bray in the semis, then defeated Marty Dack in the Final.

Zappia is on a quest for a record six consecutive Australian Doorslammer Championships.

The next major event on the ANDRA Championship schedule is the Fuchs Winternationals at Willowbank Raceway over the June Long Weekend.