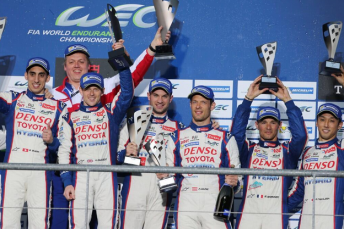 Toyota celebrates with another double podium at Spa

Toyota has completed the perfect build-up to Le Mans by winning the WEC 6 Hours of Spa.

The #8 TS040 Hybrid driven by Anthony Davison, Sebastien Buemi and Nicolas Lapierre savoured its second successive victory after saluting in the opening round recently at Silverstone.

After both of its cars crashed out at the English track, Audi hit back with the #1 R18 e-tron quattro claiming second for Lucas di Grassi, Loic Duval and Tom Kristensen.

The #7 Toyota of Alexander Wurz, Stephane Sarrazin and Kazuki Nakajima was third, just seven seconds behind the Audi.

Toyota had intended to double stint on tyres however had to revert to changing at each stop.

Davidson acknowledged that Bruemi grafted out a lot of the hard work in the #8 Toyota.

“Sébastien did a lot of the hard work in the difficult middle part of the race so when I got in it was pretty much job done,” Davidson said after the 171-lap journey.

“It’s great we got two cars on to the podium again. Now our attention has to turn to the big one in June (Le Mans).

“I am so confident in the package we have and the team around us; it really feels like we are flourishing at the right time.”

The #20 Porsche which Mark Webber shares with Timo Bernhard and Kiwi Brendon Hartley was classified in 23rd of the 28 starts after losing 23 laps.

After a smooth debut when the #20 landed on the podium at Silverstone, the Porsche experienced problems including a stint in the garage when the crew had to swap a broken front driveshaft.

Earlier the #20 came in for a stop to change the rear dampers, re-emerging in 27th place.

“Despite the problems we had with our car we never gave up fighting and got the most out of it,” Webber said.

“Our speed is encouraging. We now have to solve the teething problems which are normal for such a new project. ”

The #14 Porsche led until the second hour and again around halfway before Toyota took over the running with Buemi sweeping into the lead after the Porsche was slow to re-emerge from its pit stop.

The leader of the two P1 Porsche’s struck trouble mid-race with its twin Hybrid system, losing valuable time before the problem was sorted.

In the P2 class, the OAK Racing G-Drive ORECA-Nissan nabbed another win at the hands of Olivier Pla, Roman Rusinov and Julien Canal.
Ferrari took victory in the LMGTE Pro and Am classes.

See below for driver standings after 2 of 8 rounds