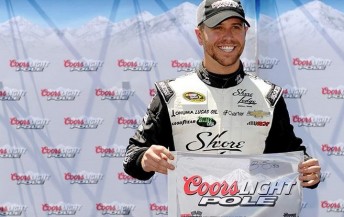 Brian Scott might not run every race in the NASCAR Sprint Cup Series, but it mattered little as he took pole for the Aaron’s 499 at Talladega Superspeedway.

Aboard the Circle Sport Racing Chevrolet, Scott was part of a Richard Childress Racing group of affiliated cars that took the top-six spots on the grid. The group ran together on a track where drafting is everything and despite this being just his fifth race in the premier Sprint Cup Series, he was the fastest.

Scott used a strong aerodynamic pull from Paul Menard at the tail of a long, six-car pack of the RCR pack of car in the final five-minute qualifying session.

“We had a plan in the beginning for the seven of us to work in a line. We were able to get the right draft and right suck at the last second to get the pole and I couldn’t be more happy for everybody.”

One RCR-allied team was not as fortunate, with the Furniture Row Racing Chevrolet of Martin Truex Jr. failing a post-qualifying inspection due to height requirements. Truex, fastest in opening Sprint Cup practice Friday, will start from the rear of the 43-car field with Kasey Kahne, whose qualifying time was also disallowed when his No. 5 Hendrick Motorsports Chevy was found underweight in post-qualifying inspection.

Although restrictor plate racing means qualifying is sure to have little bearing on the final results, it does affect pit stall selection. Plus teams will want to work together on the track and when they come to pit road.

After being forced to a back-up car after sustaining damage in practice, Australia’s Marcos Ambrose set the fastest time in the early part of the first segment of qualifying before having to settle for 26th.

“It didn’t quite work out for me,” said Ambrose.

“You’ve got a better chance at Vegas than you do out there doing that stuff. It’s all pretty random at how it all lines up, so it wasn’t a great day.

“Once the cars thinned out it was pretty much impossible, but we’ll learn from this one and see if we can make it better for Daytona.”

Next Story Hamlin wins under yellow at Talladega