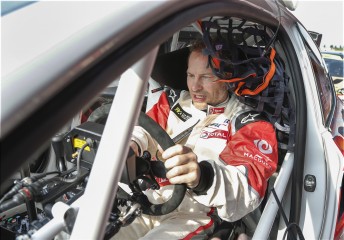 The 43-year-old French-Canadian will embark upon his first Rallycross event of his career after announcing a switch to the newly FIA backed world championship in the off-season.

After a career dominated by open-wheel racing success, the 1997 F1 world champion is eagerly anticipating his debut with Albatec Racing, but is fully aware of the challenges ahead.

Villeneuve has clocked up just 90 minutes of testing in his 600bhp Peugeot 208 Supercar prior to the season opener, which will see him go head-to-head with a host of seasoned campaigners, including former world rally champion Petter Solberg.

“It will will be fun to compete in and I am expecting hard racing.

“It is the start of the series and to be part of building it up is cool. The cars are so much fun to drive especially with the 600 horsepower and four-wheel-drive.

“The power in the cars is unbelievable, they’re like rockets but driving is what I know – it’s what keeps me alive.

“The extra elements that make up Rallycross are what I need to learn this year – the strategy, the close driving, the tyres – that’s what’s new for me.

“You don’t do Rallycross because of the jet set you do it because of the racing, so now I’m really looking forward to going head-to-head with the other drivers in Portugal.” 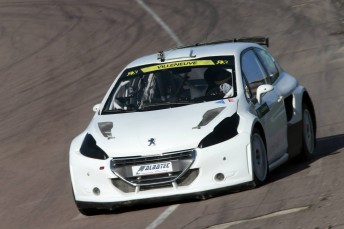 In recent years the former IndyCar champion and Indianapolis 500 winner has made a number of cameo appearances in classes such as NASCAR and V8 Supercars.

The Canadian replaced an injured Greg Murphy at Kelly Racing for three events during 2012, struggling to a best finish of 24th position.

Although committed to his new adventure, he refused to rule out a return to V8 Supercars in the future, but reiterated that only an offer from a top outfit could persuade him.

“I don’t know,” added Villeneuve when asked if he would consider a return to V8 Supercars.

“There hasn’t been any discussions but the last experience was terrible.

“It doesn’t matter how hard you push if the car is bent you are stuck with it and there is nothing you can do.”

Villeneuve plans to dovetail his World Rallycross Championship commitments alongside a return to IndyCar’s famous Indianapolis 500 after a 19-year absence.

This week the 1995 Indy 500 winner headed stateside to successfully complete his compulsory refresher course at the Brickyard, where he banked 83 untroubled laps behind the wheel of his Schmidt Peterson Motorsport entry.

As a result of the deal, he will miss the second round of the World Rallycross Championship at England’s Lydden Hill on May 24-25.

Click here for an essential guide to the FIA World Rallycross Championship.

*Stay with Speedcafe.com for all the latest news from the FIA World Rallycross Championship