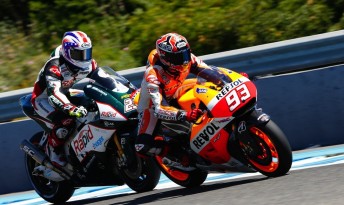 The reigning world champion saved his best until the dying moments of the session as he denied the Yamaha of Lorenzo from securing pole with an impressive 1.38.120s last ditch effort.

Lorenzo trailed the championship leader by more than four tenths of a second, while Marquez’s team-mate Dani Pedrosa completed the front row in third.

The Yamaha rider had held provisional pole for the majority of qualifying before Marquez struck in the final minutes.

The home crowd were treated to a classic duel between the Spanish riders for pole with the 21-year-old Marquez producing the fastest ever lap from a MotoGP bike around the Jerez circuit to grab the all important pole position. 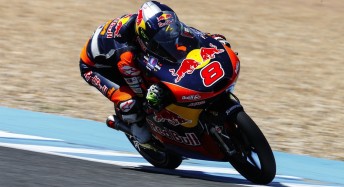 Arguably the biggest shock of the session was Cal Crutchlow’s failure to progress to Q2.

The Ducati rider, who missed the previous round at Argentina with a broken finger, could only post a time good enough for 14th place on the grid.

Australia’s Broc Parkes will start Sunday’s race from 23rd on the grid.

Queenslander Jack Miller continued his impressive start to the Moto3 season as he secured his third consecutive pole position of the season.