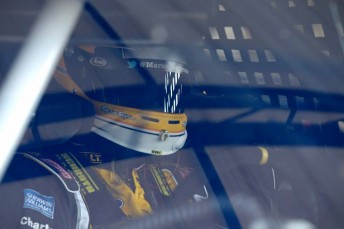 Ambrose will race the back-up car

Marcos Ambrose has suffered his second blow in a week with the Australian forced to a back-up car for this weekend’s Aaron’s 499 at Talladega.

Unlike last week where he landed a blow on the cheek of Casey Mears, this time around it was a tyre blowing out in opening practice at the Alabama Superspeedway.

Ambrose was nearing the end of a run during the first session when smoke started to come from the right front. As he attempted to slow to the pit road he locked the wheel and the tyre blew out and the Richard Petty Motorsports driver missed the pit entry.

“I was coming to pitlane at speed to see how our brake balance was and I don’t think I got more than 20 mile an hour off it before it blew that right front out,” said Ambrose.

“Maybe the tyre was going soft or the splitter was on the ground; certainly unusual.

“I avoided the pitlane entry because the wheel was locked up and then it blew out.”

After NASCAR allowed the team to change the tyre at the pit exit, Ambrose returned to the garage where upon further inspection, damage around the right-front forced the team to a back-up Ford.

“We have gone to a back-up car which has its own risks,” said Ambrose.

“If we have any incidents in qualifying tomorrow it means we would have to repair that car.”

The team believes that it was when Ambrose hit the brakes that the heat build-up caused the tyre failure.

With practice on Friday and qualifying on Saturday, the car had not been presented to tech inspection (scrutineering) and the crew took the engine out of the primary car and put it in the back-up. It means that Ambrose qualifying position tomorrow will be his starting spot. At most events qualifying is held on Friday and cars are inspected prior to practice, this was not the case at Talladega.

Ambrose arrived at Talladega as one of the drivers drawing plenty of attention following his altercation with Mears. Crew Chief Drew Blickensderfer said he backed his driver 100% and is keen for attention to switch back to their on-track performances.

“This team and this organisation is getting so much better,” said Blickensderfer.

“We want to make sure that it (Richmond altercation) doesn’t define our week. We want to build-off our 16th place in points and hopefully come out of Talladega in the top 14 and go onto the next week. Last week was just a speed bump in our season.”

Ambrose had recorded the fourth fastest time in opening practice before the tyre failure. He completed what equates to only a shakedown run without the replaced motor in the second practice to be 23rd.