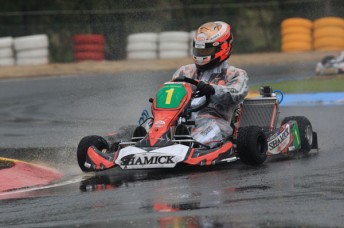 Reigning KZ2 Champion Joey Hanssen set the pace during a rain-soaked day of practice at Round Two of the Castrol EDGE CIK Stars of Karting Championship in Adelaide.

The Dutchman traded fastest times  with David Sera in the KZ2 ranks before 2012 Champion Chris Hays emerged second fastest in the final session of the day.

Hanssen’s fastest time of 39.665s around the 755m Bolivar Raceway came in the final 15-minute session that was delayed by a hail storm.

It was more than four tenths of a second faster than Hays.

“I really enjoy racing in the wet, but since I’ve raced in Australia we’ve never had a wet race,” said Hanssen.

“Over the years I’ve had some good success in the wet throughout Europe including a third placing in the WSK Series and when I won the World Cup in 2011 the final heat race was also wet.

Tigani made his debut in the class at the corresponding round in 2013.

After showing strong speed at that event, he is confident ahead of tomorrow’s qualifying and heat races.

“Last year I was running strongly before seizing an engine in the final. Hopefully I finish the job this weekend and get on the podium,” Tigani said.

Darwin driver Bryce Fullwood was fastest in the KF3 ranks.

Qualifying and three heat races will be contested tomorrow ahead of the finals on Sunday.

All of Sunday’s action will be streamed exclusively live on Speedcafe.com and will be available on speedcafe.com/kartinglive