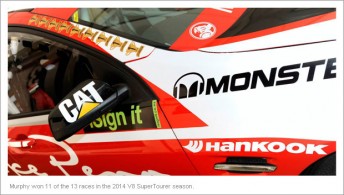 Hankook Tyre has renewed its partnership with the New Zealand V8 SuperTourer Series by extending its deal as control tyre supplier for another three years.

The agreement comes after the BNT V8ST Championship cut short its current championship, which finished with the Pukekohe round on the undercard to the V8 Supercars.

The series has moved to be aligned with the rest of New Zealand’s major championships by running its 2015 series with three enduro rounds later this year finishing with sprint races next year.

Hankook’s highly durable Ventus F200 slick tyre has served as the control V8ST tyre since the category was born in 2012.

“And that is partly down to our successful relationship with the V8 SuperTourers. Naturally we are very pleased to extend the agreement for three years.”

The opening round of the 2015 V8ST series is scheduled for Taupo Motorsport Park from September 27-28, before moving to Hampton Downs from November 1-2 and finishing the 2014 leg at Pukekohe from November 28-30.