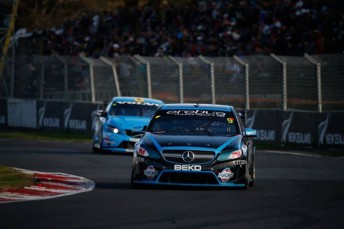 Erebus has been linked to a potential Volvo switch

Ryan Maddison has confirmed that switching manufacturers is a possibility for Erebus Motorsport next season as the team works to secure its future.

The sustainability of the team has been increasingly called into question in recent weeks as it operates its two Mercedes-Benz V8 Supercars without primary sponsors or factory Mercedes-Benz backing.

Owner Betty Klimenko told News Limited following her team’s win at Winton last month that she now has a “personal debt” after spending “between 30 million and 40 million in a year” on the team.

Her much trumpeted fortune, she revealed, “is family money, not my money, and it is tied up in a trust”.

Amid increasingly urgent efforts to gain primary sponsors for the two cars, Motoring.com.au has this week reported that Klimenko and Erebus CEO Maddison have held talks with Volvo about a potential switch to the Swedish marque.

Although declining to comment on any specific discussions that have taken place, Maddison has confirmed to Speedcafe.com that there is currently no guarantee that team will continue with its Mercedes-AMG package.

“It is a possibility,” said Maddison of switching marques.

“(But) that decision rests more so in the hands of Mercedes-Benz than it does Erebus.”

The team’s two-year branding agreement with AMG Customer Sports – which was paid to develop the E63 V8 Supercar bodywork and engine package for the team – and Mercedes-Benz Australia concludes at the end of this season.

Maddison underlined Erebus’ strong preference to continue with its current equipment, noting that it “would be very arrogant (to switch) unless there was something very attractive that compelled us to do that”.

Although Volvo has expressed a desire to one day expand its current V8 Supercars presence beyond two cars, it is unclear whether the relatively low-volume prestige marque could justify the expense of backing a second team.

“Clearly it’s in Erebus’ best interest to maintain the relationship with a brand that we’ve invested extremely heavily in,” Maddison said of Erebus’ position on renegotiations of the AMG agreement.

“It would only be if that choice was removed from us that we would then come up with an alternative.”

The talk of switching marques completely comes despite Maddison being adamant that removing the badging would allow the team to continue with its current package should the branding agreement not be renewed.

“We’ve seen it happen in the category previously where people have run a vehicle and changed manufacturer logos,” he said.

“(But) that’s not a professional approach or the direction that we would like to take.

“Our intention is to be a team of choice to multiple manufacturers.”

While much was made of its early spend on the development and upkeep of its AMG equipment, Maddison is convinced that the team can be sustainable without factory backing, as long as external commercial support can be found.

The squad made significant changes to its cost structure over the recent off-season, trimming down from three to two cars and re-profiling its engineering agreements such that all of its engine work is now down in-house.

The team has also solidly improved its on-track performances, with Lee Holdsworth taking the squad to a maiden win at Winton last month.

“If we are able to secure the true value of our commercial space I’d be quite comfortable with our model,” he said.

“There’s always room for more money coming in the front-door, that’s for sure. It was never part of our model not to have major sponsors.

“Clearly, right now, our commercial space is really the most relevant concern for us on a consistent basis.”

Klimenko sensationally declared at Winton that she “won’t be here next year if we don’t get a sponsor soon’’.

Maddison was circumspect when tackled directly on whether the lack of sponsorship could see Erebus depart the championship at the end of the season.

“I’d need to talk to Betty at a later date about that,” he said.

“No doubt she is more acutely aware of not only her passion but what her financial situation is.

“We will get to a point later in the year where we can answer that question more accurately.”

Ross Stone has continued to work as the squad’s general manager since the sale, while the core of its engineering structure also remains as it was under the SBR banner.