Home » News » NASCAR » Ambrose says passion got out of hand

Ambrose says passion got out of hand 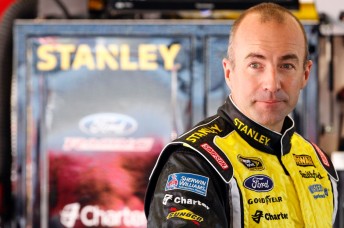 Marcos Ambrose has spoken publicly for the first time since the fight with fellow NASCAR driver Casey Mears after last weekend’s race at Richmond in Virginia.

Ambrose and Mears were caught on TV cameras having a verbal altercation before push and shove came to blows with the Australian landing a punch. Both drivers were fined by NASCAR; US$25,000 for Ambrose and $US15,000 for Mears, plus both drivers were placed on probation until the end of May.

Ambrose told a media gathering at Charlotte Motor Speedway that the situation quickly got out of hand once Mears started to push him.

“To be honest with you, once he put his hand on me and started pushing me around I was just trying to stand up for myself and my country and my family and my reputation and I threw a punch down on him to get him out of the way and let him know that I didn’t respect him not giving me my private space,” said Ambrose.

“As it goes down, if I had my chance to think back about it, a wiser man would have walked away a little bit earlier and not got himself in that situation. I don’t apologise for my actions”.

Since the incident Ambrose and Mears have spoken and each have said they have moved on.

“We’ve spoken in-depth more than once. I honestly believe that we’ll enjoy having a beer with each other,” said the Richard Petty Motorsport driver.

“I think we have a mutual respect for each other. I like Casey a lot. I didn’t have any beef with him after the race, but emotions just got out of hand and we both recognised that if we had our time again it wouldn’t happen again, but now it has, you can’t take back what has happened.”

As well as publicly holding no animosity to Mears, Ambrose also said he accepted his punishment from NASCAR.

“I caused an action that NASCAR needed to reprimand, so I’m happy to pay it and happy to move on,” Ambrose said.

“It’s a heavy fine. That’s the biggest fine I’ve ever received in racing and I think that NASCAR needed to do something and whatever they chose to do I’ll pay it.”

Amongst the NASCAR penalties, there was nothing handed to a crew member who appeared to make contact with Ambrose during the scuffle. Many people believed a blow was landed on the Tasmanian, but Ambrose insists no contact was made.

“I did not get punched. I was able to duck and weave and get out of trouble,” said the RPM driver.

“The person in question, I haven’t seen the footage, so I don’t know if there was a swing thrown, but there certainly was aggression at the end. I’ve had a phone call from somebody to apologise for his actions and that’s it for me.”

The actions of the post-race scuffle might now be over, but according to Ambrose’s team owner and NASCAR legend Richard Pettty, NASCAR needs to explain to him what the fine was for.

“You’ve got to defend yourself no matter what, but if he knew he was gonna be fined $25,000 he might have let the guy take another swing at him,” said Petty.

“As you can see in the tape, he did not initiate any of that. He was trying to get away, so I think, from that standpoint, I don’t know what their rationale is. I’ll just have to talk to them (NASCAR) and see what they come up with.”

“What provoked it? I have no idea. I don’t even think Marcos knows really what provoked the whole thing, but in the scheme of things if you can’t protect yourself, then NASCAR is not gonna come and protect you, so he had to do what he had to do.”

No more time for Ambrose and Mears to reflect on Richmond with NASCAR back on track this weekend for the Aaron’s 499 at the Talladega Superspeedway in Alabama from later today.

VIDEO: Marcos Ambrose speaks with the media in Charlotte

Next Story Ambrose takes a hit in Talladega practice