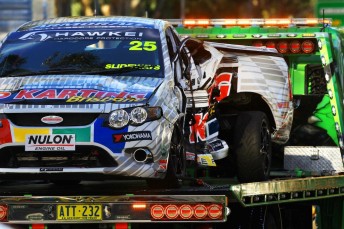 Cam Wilson has suffered a setback to his freshly repaired Ford ahead of the second round of the Australian V8 Ute Racing Series at the Perth 400 meeting at Barbagallo from May 16-18.

Wilson’s car suffered heavy damage late in qualifying at the Clipsal 500 meeting a couple of months ago in an accident which also involved Jordan Skinner.

While Skinner has declared he will be ready to return for the Perth meeting, Wilson remains in doubt following damage to the roof of his brand new shell as it was coming off the truck.

“It doesn’t look like we’ll make it to Perth at this rate. We’re completely behind the eight ball after it was damaged in transit,” Wilson said.

“We’ve set a high standard for ourselves now, to have it come off the truck with a crushed roof was just devastating.”

The rear-end of Skinner’s car was a throw away with team manager Wayne Williams challenged to repair the car in time for Perth. 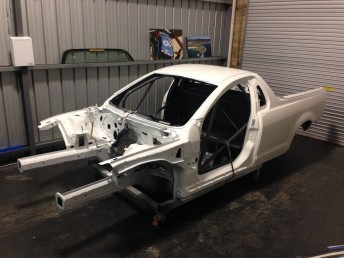 “The car was pretty bad after the incident but with the long break, it wasn’t as hard of a rebuild as we’ve had with some cars in the past,” Williams said.

“We just need to get the car tested now and it will be good to go for Perth.”

Skinner is looking forward to taking to the track again.

“We’ll be at Perth. Our aim is to go out and see if we can do a little bit better and at least make it to the grid and try and get a full weekend out of it.”

With only a week remaining until the transporter leaves for Western Australia, Big Gun Racing team manager Joe Devries is under pressure to rebuild the Wilson Ford and the Falcon’s of Peter Burnitt and reigning champion Ryal Harris.

“Pete’s (Burnitt) should be done in the next day or so but Ryal’s is a bare chassis with seats in it and we haven’t even started Cam’s (Wilson’s) yet,” Devries said.

“It’s just been crazy and we will be working around the clock to get it all done.”

Separately Gerard McLeod is in the process of buying the Jake McNally Holden VE and intends to give the car a make-over.

“Essentially it’s a swap over (and) we’re simply giving it a new shell and moving all of the parts, engine etc, over into it,” McLeod said.

Two other drivers who are excited to hit the track are Kris Walton and Jeremy Gray who both competed in the New Zealand V8 Ute Series last weekend at Pukekohe.