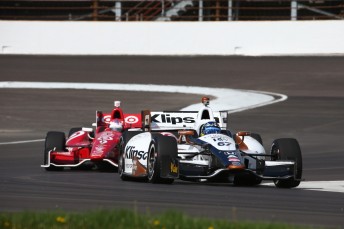 Brazilian Helio Castroneves topped the trio of Penske drivers in fourth ahead of Ryan Hunter-Reay.

Penske’s championship leader Will Power was sixth ahead of Justin Wilson and the third Penske runner, Juan Pablo Montoya.

Reigning Indy 500 champion Tony Kanaan was given the special honour of turning the first lap.

The open test across five hours gave teams sufficient time to gather valuable set-up data ahead of the opening practice sessions next week.

The race over 82 laps will be followed less than 24 hours later for the initial practice runs for the Indianapolis 500 to be staged on May 25.

Initially constructed for F1 which held its last race in 2007, the road course has been reconfigured amid a $5million spend that has also seen new spectator viewing mounds at turn 2.

See below video of the test