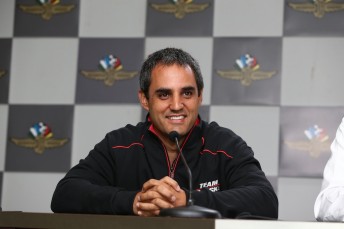 Reborn IndyCar driver Juan Pablo Montoya will return to NASCAR for two races under a deal with Team Penske.

The vocal Montoya has been confirmed to drive the #12 Ford Fusion at the Michigan (June 15) and Indianapolis (July 27) Sprint Cup races.

The deal comes as Penske revives Montoya’s IndyCar career this season, running a third car for the Colombian beside incumbents Will Power and Helio Castroneves.

Montoya’s deal to run in the two NASCAR races also coincides with Penske scheduled to make a decision following the Indy 500 later this month whether it will continue to push for a REC to enter V8 Supercars in 2015.

While the team has previously admitted to Speedcafe.com it is interested in Marcos Ambrose for the possible V8 venture, it also has a strong option under its noses with Montoya, who has raced in Australia during his CART days with Chip Ganassi.

“It’s hard to believe, but Roger Penske has never won the Brickyard 400 (Indianapolis), Montoya was quoted in a team statement.

“I think that Brad (Keselowski), Joey (Logano) and I will give Roger and Team Penske a great opportunity to check that off the list and we should be strong at Michigan as well.”

While Penske has placed trust in Montoya with the two NASCAR assignments it may also be looking to put him on the radar for any move into Australia.