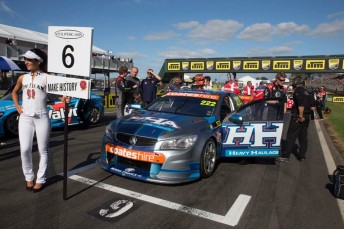 Nick Percat qualified sixth for two of the weekend’s races

Nick Percat’s goal of becoming a consistent top 10 performer in his rookie V8 Supercars Championship season is on track after a breakout weekend at Pukekohe.

Following a difficult start to his campaign that netted a best of just 15th from the opening nine races, the 25-year-old recorded a trio of top 10 qualifying and finishing positions across Friday and Saturday at the New Zealand event.

Percat then backed that up by turning a 12th place grid slot into 11th in Sunday’s finale; which came after losing two late positions thanks to a rare miscue from Jamie Whincup.

The HHA-backed entry was the first Walkinshaw Holden home in the 200km race; having been the second of the four Clayton Commodores in each of the preceding sessions.

Percat has declared the weekend as the start of repaying the faith shown in him by the #222’s Racing Entitlements Contract holder James Rosenberg for this season.

Formerly at Erebus Motorsport, Rosenberg made the commitment to move to Walkinshaw to field his fellow South Australian late last year.

Rosenberg, who himself described Percat’s Pukekohe performance as a “coming of age” over the weekend, provided the lifeline that the driver had needed to break into the championship three seasons after winning the Bathurst 1000 as a Walkishaw co-driver.

“Rosenberg has been massive for me this year. He’s one of the most genuine, down-to-earth guys in pitlane,” Percat told Speedcafe.com in this week’s Cafe Chat interview.

“He knows what he wants and for him to put me in a car at Walkinshaw Racing was a big thing for me.

“He saw how important it was for me to stay at Walkinshaw Racing. He could have had many other drivers at many other teams.

“He put his neck on the line and finally I’m starting to repay him in results.”

The Pukekohe performance lifted Percat from 24th to 22nd in the championship standings after 13 of 38 races.