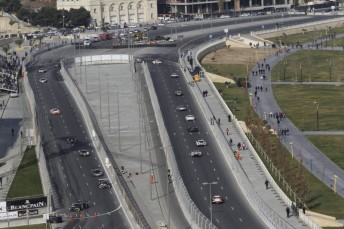 Azerbaijan has agreed to a deal with Bernie Ecclestone to become the host of the Formula 1 European Grand Prix from 2016.

Speculation regarding a possible race in the former Soviet nation has been growing with a government official revealing a deal is in place with an announcement imminent.

The 4.3km Baku street circuit is believed to be the venue for the grand prix after successfully attracting a 50,000 crowd for last year’s FIA GT Series finale.

The venue is due to host the final round of the Blancpain Sprint Series this year.

“We have signed the deal with Bernie Ecclestone and will announce it officially with an event in Baku shortly,” said Azad Rahimov, Azerbaijan’s Minister of Youth and Sports, who is also the chief executive of Baku 2015.

If Azerbaijan joins the F1 calendar it will be the second former Soviet nation to be added to the schedule after Russia was included on 2014 roster.

The inaugural F1 Russian Grand Prix is due to take place on October 12.

However, the race could be in jeopardy following Russia’s involvement in the Ukrainian crisis on the Crimean peninsula.

The World Superbike Championship has already abandoned its visit to Russia this season citing political reasons for the cancellation of the event.