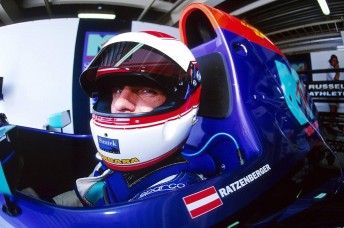 Sometimes overshadowed in the dire aftermath of Ayrton Senna’s death is the similar fate which befell Roland Ratzenberger.

Ratzenberger perished in qualifying when he crashed into the outside wall at Imola’s Villeneuve corner at more than 300km/h.

The Austrian, 33, had been a bit of a journeyman racer in lower formula, sports cars and dabbled in touring cars before making his F1 debut in that fateful season for the Simtek team.

While Senna was a god, a globally recognised figure, Ratzenberger was essentially unknown outside the sport.

He was the ‘other’ driver who was killed that weekend when F1 was given its most poignant wake-up call.

Ratzenberger was the first driver to lose his life on a grand prix race weekend since 1982 when Osella driver Riccardo Paletti was killed at the start of the Canadian Grand Prix in Montreal. (*Elio de Angelis was killed in a testing accident in 1986.)

Hints of San Marino’s weekend from hell surfaced on Friday, April 29, when the Jordan driver, Rubens Barrichello took flight after launching off the kerb at the Bassa corner slamming into the tyre barriers at 225km/h on the full.

It was a narrow escape for the Brazilian who was transferred to Maggiore hospital in Bologna where he was diagnosed with a broken nose and was fitted with a cast on his arm.

This was to be a weekend where disaster was imminent, seemingly at every turn.

At the start of the race Pedro Lamy slammed into the back of a stationary JJ Lehto who had stalled his Benetton.

The impact caused a mass of debris to fly through the air, resulting in injuries to almost a dozen spectators.

Then in a final blow after a weekend fraught with calamity, Michele Alboreto was leaving pit lane with 10 laps remaining when the right rear wheel parted company with the Minardi.

The wheel collected four mechanics (equal number from Ferrari and Lotus) who were hospitalised. 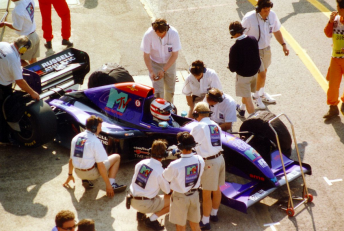 This was a weekend where two drivers lost their lives but the reality is that a large portion of the population was only familiar the name of one of them.

The FIA president Max Mosley had logically thought that he should attend Ratzenberger’s funeral, believing that everyone would be going to Senna’s service in Sao Paulo.

“He (Ratzenberger) was forgotten but actually I went to his funeral rather than Senna’s because everybody went to Senna’s and I thought it was important that somebody went to his,” Mosley told Reuters.

Simtek team-mate David Brabham recounted that impossibly tragic weekend saying how he feared for his safety.

“In some sense I was thinking I was lucky to get out of there alive because so much stuff was happening around you that you just wanted to get through the weekend as safely as you could really,” Brabham told Speedcafe.com

In the hours after Ratzenberger’s death there remained doubt whether or not Simtek would pack up and go home and abandon the grand prix.

The decision on whether they continued was left in the hands of Brabham, who was considered very much a respected and valued leader within the team.

“The mood was something we’d never experienced before,” Brabham said.

“(amid) the confusion, the what do you do next?, the brain kind of ceases up in some sense.

“On the Saturday night the decision to continue to race was down to me. The team said it’s up to me. 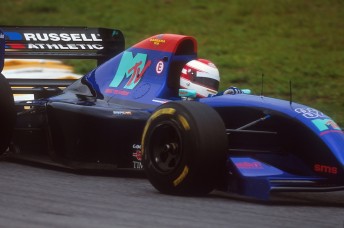 “I didn’t know what was the right decision. I had no idea.

“I thought about it and decided to do the Sunday warm-up and see how I feel and see what the situation is and make a judgement from there.

“We went out and for us our pace was better than normal for whatever reason; I don’t know whether I was on empty tanks or what.

“I came into the pits and just saw how the team had a slight change about them.

“This heavy black cloud that was around the team, although it was still there, it just lifted slightly.

“I thought I had to make a decision there and then that I had to race for the team.

“I had to pick up the pieces and was the catalyst who could make that happen.

“If I was in a similar situation to Roland, I would be ‘come on, you guys are racers, get on with it’.

“It might have been considered a lack of respect but it wasn’t at all.

“It was really showing great respect for Roland.

“We had to keep going in his memory too.”

See below for Ratzenberger’s career highlights

*Tomorrow: Part 4 of Speedcafe.com’s special series looks at the death and funeral of Ayrton Senna.