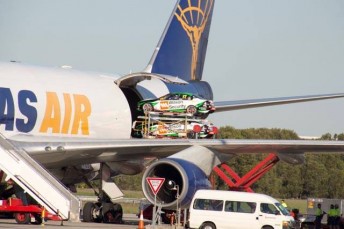 V8 Supercars is pushing hard to slash the cost of its air freight as it continues talks with international promoters about joining the championship in 2015 and beyond.

Last weekend’s ITM 500 Auckland is the only fly-away on this year’s schedule following a succession of ultimately unsustainable events in China, Bahrain and the United Arab Emirates over the last decade.

A planned return to Austin, Texas, next year currently appears unlikely unless a partner event can be found in the region with which the Circuit of the Americas can share the freight costs.

The trip to the United States was the championship’s most expensive yet, with the total freight cost understood to have approached $2.5 million.

V8 Supercars and its partner Gibson Freight are targeting a cost reduction of approximately 25 percent; a move seen as vital to getting any new events over the line.

The championship’s CEO James Warburton told Speedcafe.com that the work is already helping to open doors with interested international promoters.

“There are a number of things that we’re looking at to get the model right, given that it’s such a big cost,” said Warburton of the freight logistics.

“There’s an enormous amount of working going into the model and how we can best operate.

“We’ve got to understand that it’s tough economic times for everyone internationally.

“The big sanction fees of the past are not around so it’s a matter of cutting our cloth and changing the model to make sure it’s sustainable for the promoters.

“The hard cost of the tyranny of distance of moving everything is the critical part,” he added when asked if the plans are having an impact on existing discussions with potential promoters. Each car currently has its own 3.5 tonne container

“It obviously means the numbers can come down and I think we’re opening up a lot of doors.

“We’ve surprised a lot of people with a different approach to what we’re doing.”

The existing model of spreading the cars and equipment over two Boeing 747 flights was deduced ahead of what proved to be a one-off trip to Shanghai, China, in 2005.

V8 Supercars and Gibson have already devised a single-plane transport model, but are now working with teams on ways of ensuring that all of their requirements continue to be met.

The current freight for each car is split between the teams’ own containers and communal boxes that carry items such as spare engines, transaxles, wheels and front spoilers.

The ramifications of sending selected items by cheaper scheduled airline services or even sea freight, rather than in the chartered plane with the race cars, are being analysed in the hope of trimming down the costs.

Gibson Freight proprietor Bill Gibson acknowledges that cost reductions need to be found without hurting the function or presentation of the teams at international events.

“It’s all do-able, nothing is prohibitive, but it’s just a matter of finding a balance between what works for the teams, what is affordable for the promoters and what can be done within the time available,” Gibson told Speedcafe.com.

“Then the mathematics just become the capital cost of say spoilers, rims, panels and so on to have in sea freight, versus the cost of flying them there and back on scheduled airline services.

“We’re working on a number of models and are working out some precise costings for each region that the championship could potentially visit.”

Gibson, whose company also looks after freight for Formula 1, MotoGP and World Superbikes races in Australia, says that the fundamental set-up of V8 Supercars’ standardised container and car rack systems make it the most easily transportable championship in the world.

Formula 1 also has standardised containers but places no limit on how many each team can take, ensuring that around six 747s are needed for the trip to Albert Park each year.

The bike championships, meanwhile, see teams operate with containers of their own design, ensuring a tough logistical challenge to get the equipment from Melbourne’s Avalon Airport to Phillip Island.

The V8 Supercars freight has traditionally included items such as the category’s Safety Cars and full television production equipment, which could both be sourced locally at future international races.

Next Story Brabham: Sad no statue for Ratzenberger

Previous Story Castrol signs up as major backer for Townsville