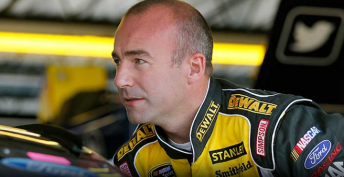 NASCAR has issued Marcos Ambrose with a $25,000 fine after he punched rival Casey Mears soon after the Toyota Owners 400 at Richmond.

Mears was handed a $15,000 fine after he incited the fight by pushing and shoving Ambrose following their heated verbal exchange in the garage.

Ambrose has accepted the decision and does not intend to appeal the penalty.

Speedcafe.com contacted Ambrose for comment however he declined the opportunity, saying that his Richard Petty Motorsports team will be making a separate announcement on Thursday (US time).

NASCAR found both Ambrose and the #13 Chevrolet GEICO Germain Racing driver Mears had violated sections 12-1 (actions detrimental to stock car racing) and 12-4.9 (behavioral penalty: involved in an altercation in the garage area after the race).

The category has placed both drivers on probation until May 28.

Mears came out publicly on Fox Sports NASCAR Race Hub program and said the fight was the result of ‘a few things that happened on the track’.”

When asked to comment on the incident fellow driver Kevin Harvick told NASCAR.com: “It’s kind of like the retaliation thing on the race track.

“When you have guys pulling out of the pits and just ‘Days of Thunder-ing’ a guy to knock him back out of the race, those kinds of things are very Late Modelish to me.

“The after-the-race stuff can go either way; it can be an argument, it can escalate.

“You hope that it doesn’t come to that point; that’s pretty physical.

“It’s a unique situation; I don’t know what the right answer is.”

Ambrose finished 18th, one place ahead of Mears at Richmond with the Australian now 16th in the Sprint Cup standings heading into Talladega this weekend.