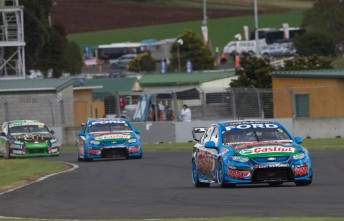 The snapper head racing team’s 120 points haul came with a prediction accuracy of 52% after they took full advantage of the new-to-2014 bonus points system and collected 60 bonus points thanks to correctly predicting five of the top 10 weekend performers in position.

In the overall league standings Bloopy Enterprises has taken top spot from SCATTERS who slipped back two spots to third. Team Nosk moved up two spots and now occupies second in the overall standings.

In the Experts’ league Greg Rust topped the trio for the Pukekohe round with a healthy 37 points haul.

Speedcafe.com maintains the lead in the Expert league standings with Rust moving ahead of WTCC Champion Andy Priaulx after his strong performance, albeit by just once point heading into the next event.

Next Story New chassis for Wall after Pukekohe crash