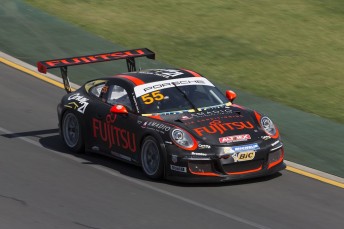 Fujitsu Racing has confirmed that Tim Miles will co-drive with Renee Gracie for the Porsche Carrera Cup Australia endurance round at Phillip Island next month.

Miles joins the team as the Elite class driver to share the duties with Fujitsu Pro Class mainstay Gracie.

The third round of the Carrera Cup Championship from May 23-25 runs a similar format to the one-off Rennsport meeting that was held at Sydney Motorsport Park last year.

The pro/am format will include 2 one-hour races.

Miles is the founder and principal of Miles Advisory Partners, a corporate advisory firm specialising in business divestments and mergers and acquisitions.

He is best known in motorsport for his tenure as a part-owner of the now defunct Tasman Motorsport V8 Supercars team.

“I am really looking forward to stepping up to Porsche Carrera Cup for the Phillip Island event,” Miles said. “It will be a big step-up from what I am used to but I am excited about racing one of the brand-new 991 model cars on one of the fastest and most exciting tracks in the country.”

Miles previously raced Formula Ford in his native New Zealand in the late 1980s, before heading to England where he worked with the Pacific and Bowman racing teams in Formula 3, followed by a stint with Vic Lee Motorsport in the British Touring Car Championship.

He currently races in the Porsche GT3 Cup Challenge with McElrea Racing, the same team that has run Gracie for the past two seasons.

Gracie is coming off her best performance at the Formula 1 Rolex Australian Grand Prix, where the 19-year old finished 10th in the second race of the weekend and recorded career-best , qualifying, race and round results.

Next Story Percat returns to Carrera Cup for Phillip Island