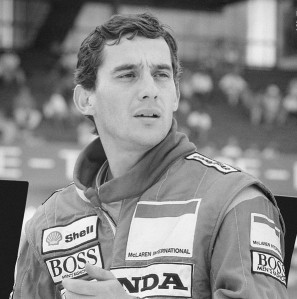 Ayrton Senna was being earmarked by Bernie Ecclestone to make his entry into Formula One with his Brabham team in 1984.

The F1 commercial leviathan and then team owner had seen that the capabilities of Senna during his successful British Formula 3 season were considerable.

The pitched battles between the West Surrey Racing driver Senna and Martin Brundle were extreme and ferocious.

It had followed similar wars waged during his karting career highlighted through the world championship during the late 1970’s and early 1980’s including battles with his team-mate Terry Fullerton who Senna would proclaim as his greatest rival years later.

It was no surprise then that the Brabham team had designs on this rapid Brazilian.

But it never eventuated and Ecclestone’s Brabham squad continued to be spearheaded by the fiery Brazilian Nelson Piquet.

In the end, the pathway for Senna to join F1 was forged by Ted Toleman. 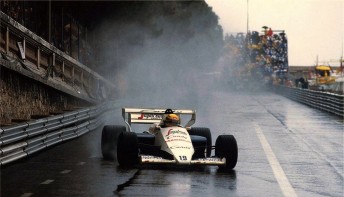 Senna starred at Monaco in 1984

Senna made his debut, appropriately, in his home grand prix at Jacarepagua on March 25, 1984.

Ironically the race was won by the French-Armenian driver Alain Prost, a racer dubbed the ‘professor’ for his clinical analytical ways and who would in later years forge a fierce rivalry with Senna.

The rather obtuse looking Toleman-Hart TG183B was not the most effective of instruments for Senna to chisel out his teething period in F1.

Yet in the style of a driver making an average car look good, Senna was to announce his arrival on the big stage in stunning fashion. It was in the wet at Monaco when Senna drove a most extraordinary race that he announced his immense powers.

The worse the visibly and conditions were the more rapid was Senna’s attack on Prost in the principality.

And when Jacky Ickx unfurled the red flag, he prevented what could have been the most astonishing win in Grand Prix history yet at the same time saved Prost the indignity of being beaten by an F1 newby.

Senna’s career was off and running and inevitably he became the focus of rival team overtures despite being in his maiden year of a three-year term with Toleman.

Towards the end of the year it became public that Lotus had successfully poached Senna, sparking an acrimonious split.

Undaunted by more adept teams and more experienced drivers, Senna realised his maiden GP victory in 1985, appropriately in the wet at Estoril, Portugal, after snatching pole position from Prost.

In the process he would snare seven pole positions in 1985, the last of which came on the streets of the first Adelaide GP when he produced one of the most hair-raising and dazzling qualifying laps ever seen on a street circuit. 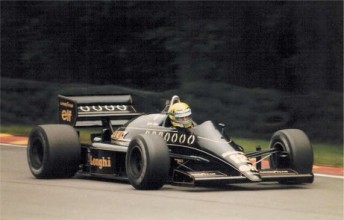 He would later in the year master one of the great balls-out tracks, Spa, to win the Belgium GP, the second of what would be 41 career victories.

The turbulence with Prost was to reach its zenith in 1988 when Senna left Lotus to join the wily Prost at McLaren.

Commandeering McLaren’s MP4/4, one of the most stunningly dominant grand prix cars of all-time, the drivers were to wage a fierce season-long battle.

It culminated with Senna clinching his first world championship, sealed with a stunning come-from-behind effort at Suzuka. In the process Senna had claimed eight wins for the season, at the time breaking the record of wins in a season established by Jim Clark 25 years earlier. 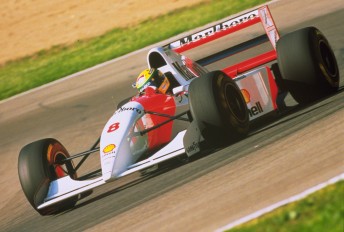 Between them, Senna and Prost had managed to win 15 of the 16 races in the season.

The only blemish was Monza when Senna made a rare mistake and gifted victory to Gerhard Berger in the Ferrari.

In 1989 the McLaren intra-team battle would be engulfed with tension and controversy.

Senna needed to beat Prost at the final two races of the season – Suzuka and Adelaide – to successfully defend his title.

In a battle that would go down in F1 infamy, Senna, desperate to wrest the lead from Prost, unleashed a forceful move resulting in the two cars becoming interlocked and sliding off the track in tandem.

Senna would return to the fray, and after replacing his front wing, would regain the lead and win only to be excluded from the results for missing the chicane.

Senna refused to take the defeat lying down, saying: “What I have done is done and is correct.”

As Senna remained at McLaren, Prost took up residence at Ferrari for 1990. Senna’s final win in Adelaide in 1993

The pair found themselves in a similar position coming into Suzuka however Senna had the advantage on the points table.

Senna was on pole but was on the dirty side of the track with Prost next to him on the cleaner side.

Predictably Prost won the start but Senna didn’t relent with the McLaren ultimately collecting the Ferrari with both cars ending up in the gravel that resulted in Senna claiming the title.

In the aftermath Senna would bullishly say: “I don’t give a damn what Alain Prost says.

“He took a chance going into the first corner when he couldn’t afford to.

“He knew I was coming down the inside and he closed the door.”

Senna’s contractual situation with McLaren went from a multi-year one to a single year deal from 1991. 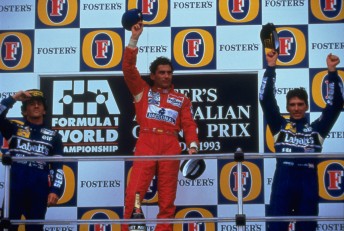 The Brazilian managed to claim the opening four races of the 1991 season.

He then strung together wins at Hungary and Spa before winning the season-ending Australian GP.

His third title was in the bag however the threat was now emerging from Nigel Mansell and the Williams team.

In 1992 Honda fielded a new V12 engine and it struggled to keep pace with the Williams-Renault V10 machine which debuted unheralded levels of technology with its all-singing, all-dancing FW14B.

Mansell and Williams made a one-act affair of the championship in 1992 while Senna’s immediate future had remained clouded for the following year.

Finally Ron Dennis managed to persuade Senna to sign for another year with the Woking team.

His arch nemesis Prost, after taking a year off in 1992, returned to battle this time in Williams colours, replacing Mansell who had gone to IndyCar with Newman-Haas in 1993.

Included in Senna’s haul was his mesmerising performance in the wet to win the European Grand Prix at Donington in what many believe was the finest of his 41 F1 wins .

Senna closed out the year with victory on the streets of Adelaide which would be his final podium.

Senna’s association with McLaren finished at the end of 1993 and he would soon be announced as Williams prize catch for 1994.

The Grove team had taken the previous two championships and Senna moving to the operation made Williams a certain bet for a hat-trick or so it seemed.

However during pre-season testing it became evident that all was not right with the Williams.

Senna had complained vehemently that he had no confidence in the car on the limit.

These problematic beginnings to 1994 were to manifest themselves into one of the darkest F1 seasons on record and cut short the life and career of one of the most dazzling drivers to don crash helmet.