Ayrton Senna spent 10 years battling for victories and championships in Formula 1 behind the wheel of an array of wildly different machinery.

Below is a guide to the cars that helped turn the Brazilian into a motor racing megastar.

Senna made the leap from British Formula 3 to the big time with the Toleman team where he campaigned the Rory Byrne and Pat Symonds designed TG183B, which developed into the TG184. The car featured an unusual twin rear wing and front mounted radiators. While he didn’t achieve a Grand Prix win, the car took him to three podiums, including a stunning drive to second at a rain soaked Monaco Grand Prix. The famous colours of the John Player Special Lotus 97T took Ayrton to his first Grand Prix win at a wet Estoril. The turbo-charged Renault V6 Lotus designed by Gerard Ducarouge piloted a primitive form of barge boards and winglets on the rear of the car to aid air flow. Lotus 97T at the Goodwood Festival of Speed

The Lotus 98T was a development of the 97T featuring a lower monocoque, a new Renault V6 engine which churned out 1200bhp connected to five and six speed gearboxes depending on preference. The 98T had a two stage ride height adjustment system and a fuel consumption micro computer which was revolutionary at the time. The car guided Senna to third in the 1986 F1 World Championship with victories at Jerez and Detroit. 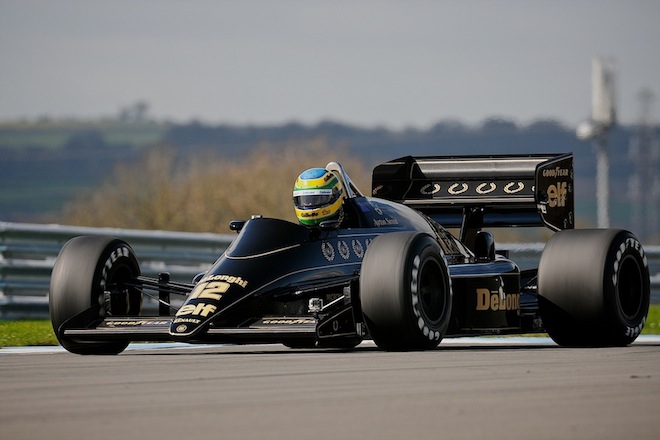 Lotus 98T being driven by Bruno Senna at Donington Park – Pic by www.jdhmotorsportphotography.com

Ayrton’s final year at Lotus saw him get behind the wheel of the Gerard Ducarouge designed Lotus 99T which was fitted with electronic active suspension.  After two years of Renault power, the French manufacturer was replaced by a Honda V6 turbo. The car’s JPS livery was replaced by the bright yellow colours of Camel. Regarded as one of the more bulky car’s of its generation, Senna still claimed wins at Monaco and Detroit. 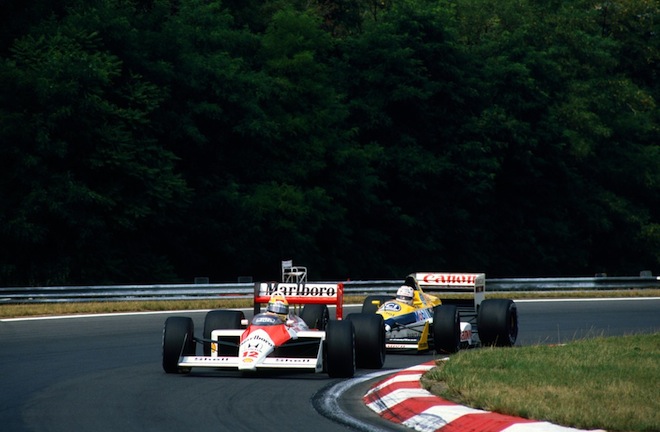 Senna driving the MP4/4 at the 1988 Hungarian Grand

The MP4/5 and MP4/5B was a derivative from the all conquering MP4/4 that was campaigned by Senna in both 1989 and 1990. It was the first year following the ban on turbo engines, which left the team to incorporate a new naturally aspirated 3.5 litre Honda V10. It was on the pace from the start with Senna recording six victories to Alain Prost’s four in 1989.

The following year after losing Nichols to Ferrari, the car’s wings were redesigned along with the rear body work to house larger radiators. The Honda V10 was also tweaked with Senna doing much of the development work. The MP4/5B earned Senna his second world championship. Designed by Neil Oatley, the MP4/6 was regarded by many as the most competitive car during the 1991 F1 season. The Honda V10 from the MP4/5 was replaced by an all new but heavier V12, which was expected to deliver 720bhp. Senna was initially not convinced by the new unit, which forced the team to extend the length of the car by 4cm to cater for the bigger engine. However, McLaren’s new six speed H pattern gearbox helped offset the increased weight and the Brazilian went on to record seven wins and a third world title. It is the last car to win an F1 world title powered by a V12 engine. 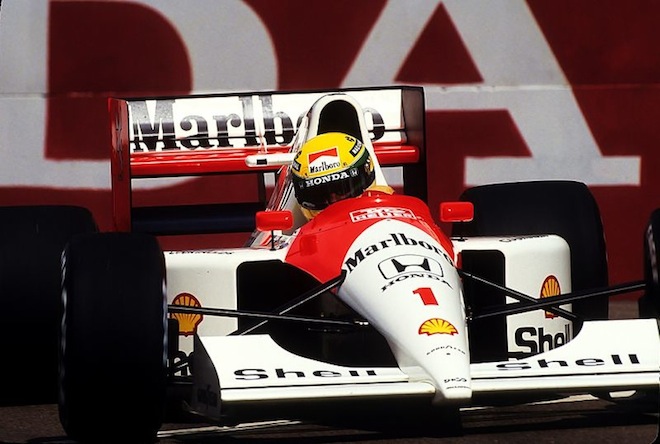 McLaren’s MP4/7A featured several revolutionary additions as the team fought hard to keep up with Williams. The car was extensively developed in the wind tunnel with the body featuring many intricate aerodynamic pieces, highlighted by its multi component rear wing. The car also showcased a hydraulic operated semi automatic gearbox and a fly by wire throttle, meaning gear changes could be completed without the need to lift off. Powered by a Honda V12, the car couldn’t keep up with Williams FW14 with Senna recording just three wins. 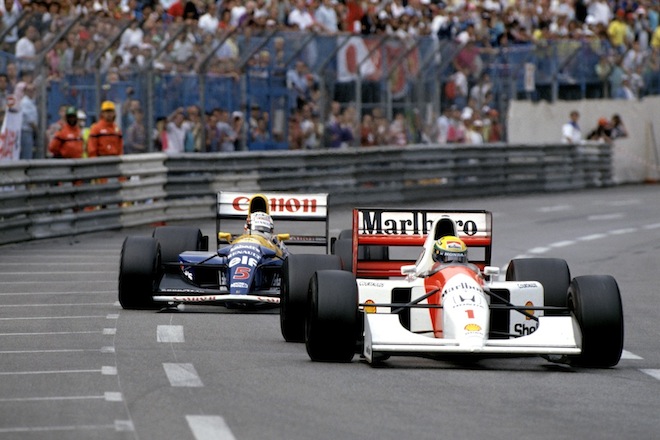 Senna leads Nigel Mansell in the MP4/7A at Monaco

Senna’s final year at McLaren saw him presented with an underpowered MP4/8 after the team agreed to a customer engine arrangement with Ford. The 3.5 litre V8 was an estimated 80bhp down compared to the pace-setting Renault. Despite its lack of power, the short wheelbase MP4/8 in the hands of Senna scored five wins, including the famous triumph at Monaco and his last Grand Prix victory at Adelaide. Senna raced the Williams FW16 on just three occasions before his fatal accident during the San Marino Grand Prix. Despite harboring a proven Renault V10 engine, the Adrian Newey designed car had its shortcomings. It had a very narrow driveability window as a result of the team losing the use of their much heralded active suspension and traction control which was outlawed. Senna retired from all three races.