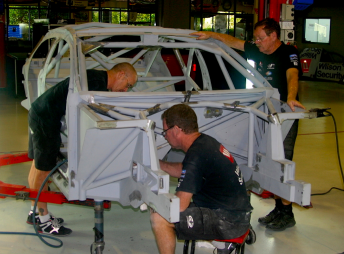 DJR is building up its spare chassis for Wall

Dick Johnson Racing has confirmed that it is building up its spare chassis for David Wall to use at Barbagallo next month after his heavy crash at Pukekohe on Friday.

The #17 Falcon made heavy contact with the left-side concrete wall at the fast Turn 11 after a clash with Chaz Mostert.

Wall spent the remainder of the weekend on the sidelines and will now have a new car for the May 16-18 Perth event.

“With the tight turnaround to get the cars on their way to Perth, we are going to introduce a new one.

“We have a spare, third chassis, built by Pace Innovations at the same time as the two we have been racing since last year.

“Paul Ceprnich and the team there have done a great job with it. FPR have also been a great help with getting parts sent up for the build.” 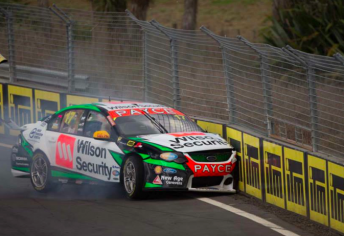 DJR undertook initial work on the damaged car at the circuit over the weekend, but would have had little time to complete the chassis repairs between receiving it back from New Zealand and dispatching the team truck to Barbagallo.

“From New Zealand to Perth is a calendar nightmare when you sustain damage like we have, but the boys are into it already and we will see how it progresses over the coming days,” added Story of progress on the new chassis.

In the immediate aftermath of the incident, team owner Dick Johnson called for a review of the concrete fencing that lines the potentially hazardous high-speed corners on the Pukekohe circuit.

Johnson also suggested that Mostert could have benefitted from a second season at DJR after witnessing the rising star’s troubled start to his career with the factory Ford Performance Racing outfit.

The crashed car, codenamed DJR FG18, was the chassis that Mostert took to victory at Queensland Raceway for the legendary team last year.

Absolved of blame from the Pukekohe incident by Stewards, Mostert went on to score podium finishes in Races 12 and 13 on Saturday and Sunday respectively.