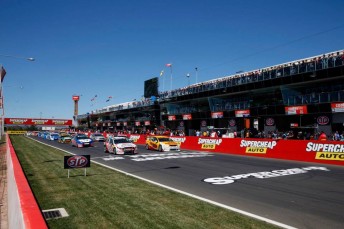 V8 Supercars will formally canvas interest for current-specification Wildcard entries before making a final call on whether or not to allow Dunlop Series cars into this year’s Supercheap Auto Bathurst 1000.

A proposal, prepared by Novocastrian Motorsport owner Wayne Russell on behalf of several interested Dunlop teams, to include selected second-tier cars in the event was discussed at last weekend’s Pukekohe meeting of the V8 Supercars Commission.

The conversation comes ahead of what could be the lowest car count in the event’s history as a V8 Supercars race, following the downsizing of the championship’s full-time grid to 25 this year.

The V8 Supercars Championship teams are understood to be pushing for interested second-tier squads to lease surplus Next Generation (Car of the Future) specification vehicles, rather than run their own cars.

Although as many as eight previously raced COTF chassis currently sit dormant, the expense of preparing and potentially repairing newer, leased equipment is thought likely to render such deals unviable.

Several main series teams have meanwhile expressed a desire to run extra cars themselves, but none have so far emerged with a commercial package enabling them to do so.

Confirming that the Commission discussed the Dunlop proposal, V8 Supercars’ general manager of motorsport, Damien White, stressed the category’s desire to see if any extra current-specification entries can be put together first.

“At this stage, as we do about this time of year anyway, we need to send out a letter to all VCS (V8 Supercars Championship) and DVS (Dunlop Series) teams inviting Wildcards,” White told Speedcafe.com.

“We need to see what, if anything, that produces before we go down the path of DVS cars.”

Although conceeding the need to provide a concrete answer to interested Dunlop Series teams well ahead of the event, White suggested that at least another six weeks will pass before a firm decision is made.

“It (a timeline on the confirmation) hasn’t been discussed, but I think that if anyone was serious about submitting a Wildcard (with a current-spec car) for Bathurst, they would be aware now that that is their intention,” he said.

“If we send out a letter in the next week or two, it would probably be a month after that (when we’ll have a firm idea of any Wildcard entries), I would have thought.

“Mid-June is not an unreasonable timeline to have someone commit to the biggest event that we have.

“The flip-side is that if we left wildcard submissions for a Next Generation car too long and there happened to be a DVS team waiting to see what happened…. we have to give them the right amount of time too.

“At this stage, you won’t see any DVS cars at Bathurst, but let’s put the letter out and see what’s out there first.”

The 2013 Bathurst 1000 drew a single Wildcard entry from Triple Eight Race Engineering, while second-tier teams were last represented in the marquee event in 2010.

While the speed of the Dunlop Series cars against their 2014-specification counterparts is known to be a concern to some main series squads, White dismissed discussing details of how the cars would run alongside each other as “premature” at this stage.

Steve Owen’s pole time from the Dunlop Series event at Bathurst last year would have been enough to put his MW Motorsport Ford fifth on the grid for The Great Race.