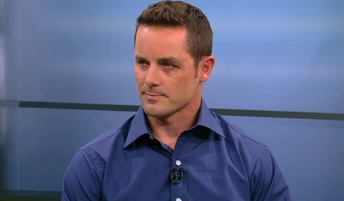 Marcos Ambrose and Casey Mears have sat down and talked to each other following their public altercation in an ugly sequel to the Toyota Owners 400 at Richmond.

While Ambrose is yet to make any formal comment about the incident, Mears has told the NASCAR Race Hub program on Fox Sports that the pair had a good conversation two days after their spat.

Richard Petty Motorsports driver Ambrose landed a punch on Mears after the latter was seen to push and shove him following a heated verbal exchange.

Footage of the incident also showed that Ambrose was hit by an unknown crew member as the fracas was being broken up.

While not going into details Mears said there were a few incidents involving the pair during the race in which Ambrose finished 18th, one place ahead of the #13 Geico Chevrolet driver.

“It was a few things on the track,’’ Mears told the program of what triggered their feud.

“At the end of the day, none of that should ever happen.

“But in the heat of the moment when you get out of your racecar and it just happened to you … some stuff that you didn’t like, we started going at each other.

“Before we knew it, it escalated really quickly.

“For a moment there, I kind of wanted to hit him, but I thought I can’t do that. So I grabbed him.’’

Ambrose subsequently connected with a right hook to the left side of Mears’ face.

Mears was unconvincing when he was asked whether friction between the pair had been smoothed over and remains confused over how he should react to a similar situation in future.

“I don’t know how to distinguish what I’m able to do next time,’’ Mears said while sporting bruising around his left eye.

“Professionally, I want to know where that line is. It’s hard to say what (NASCAR) will do.’’

NASCAR officials are investigating the incident but it is not expected to know whether they will issue any penalties or take no action until tomorrow.

See below for Fox Sports video