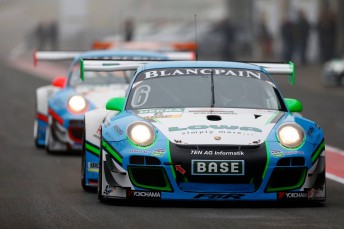 The 21-year-old from New South Wales, driving alongside Mario Farnbacher in the Farnbacher Racing Porsche 911 GT3, endured a weekend of mixed results.

Having qualified 14th for race one, just a second adrift of the pole sitter Rene Rast, the car was caught up in an incident and retired on the opening lap.

HTP Motorsport’s Maximillian Buhk, who finished second at 2014 Bathurst 12 Hour, won the opening race from Rene Rast by three tenths of a second.

Morcom and the Farnbacher Racing squad produced an impressive drive in the second race with a 10th place finish after starting from the pit-lane. The result secured the team a solitary point.

The Sydney driver avoided a huge multiple start line crash which marred the opening weekend for the championship.

Rast won race two for ABT Racing with his Audi R8 finishing ahead of the GW IT Racing Team Porsche of Christian Engelhardt and Jaap van Lagen.

The ADAC GT Masters moves to Zandvoort for Round 2 on May 9-11. 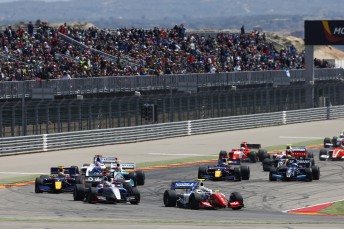 Carlos Sainz Jr and Oliver Rowland shared the victories in the second round of the Formula Renault 3.5 Championship at Spain’s Motorland Aragon Circuit.

The Spaniard fended off Nikolay Martsenko in the early stages before the DAMS driver took complete command of the race.

In the end, Sainz Jr took the chequered flag by 14.3s from Martsenko with Fortec’s Rowland in third.

It was Rowland who starred in race two as he claimed a maiden victory in the category with a lights-to-flag drive.

Pierre Gasly came home in second with Brit Will Stevens in third.

The Formula Renault 3.5 Championship heads to Monaco on May 25. 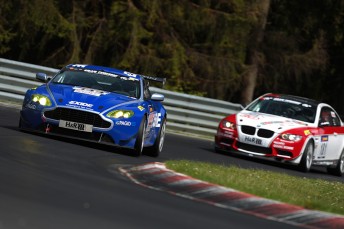 Queenslander Liam Talbot claimed a class podium in the third round of the VLN Endurance Series at the notorious Nurburging Nordschleife circuit.

The Australian GT racer helped his Aston Martin Test Centre team complete 25 laps of the 22.8km circuit to finish 43rd in the 201 car field and second in the SP8 class.

The Marc VDS BMW of Nicky Catsburg and Dirk Adorf won the race outright from Dorr Motorsport and Phoenix Racing.

The race was ideal preparation for when Talbot tackles the Nurburgring 24 Hours which takes place on June 19-22.

It was her second win this year and eighth in total. Enders-Stevens sits at the top of the points standings and it was the 99th victory for a woman in NHRA top level competition.

Antron Brown was another to continue his great season in Top Fuel, taking another win – this time over AlAnabi Racing driver, Khalid Al Balooshi.

Australian Richie Crampton was bundled out in the opening round after earlier setting the ninth fastest time in qualifying.

The next round of the NHRA will be across the weekend of May 16-18 in Atlanta.

Next Story Le Mans dress rehearsal for Porsche at Spa