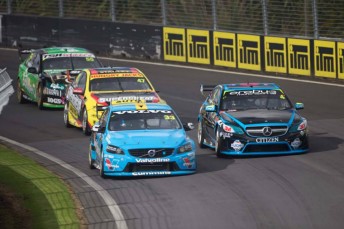 A new rule mandating a centre-of-gravity location for engines in the V8 Supercars Championship will be in place for the next event at Barbagallo.

The regulation was ratified by the V8 Supercars Commission on Sunday at Pukekohe following testing of each team’s engine at Winton three weeks ago.

The centre-of-gravity position had emerged as a point of contention following the introduction of Volvo Polestar’s engine, which is understood to have debuted with as much as 20 percent of its total minimum engine weight requirement in its sump.

The design had arisen after the previous minimum weights for engine blocks and heads was replaced by a total, 200kg, engine weight under the Car of the Future regulations; enabling greater scope for the strategic placing of ballast for improved handling dynamics.

V8 Supercars gave a guideline centre-of-gravity position to teams in the week following Winton, where it had brought a testing frame to measure each unit.

Although the category’s technical department expressed a desire to have the rule implemented by Pukekohe, the amount of work involved for teams ensured that plan was postponed.

Several teams are currently constructing their own frames to test out their engines, while others are relying on computer calculations while designing ballast ahead of the Perth event.

V8 Supercars’ general manager of motorsport, Damien White, confirmed to Speedcafe.com that the exact requirements for ballast location will be discussed directly between the category and each individual team.

The Volvos have been running 20kgs of ballast in boxes on the inside of their shock towers over the last three events following an interim request from V8 Supercars’ technical department.

Erebus, meanwhile, had earlier this year been given dispensation to run its existing engine ballast on the chassis rails of its Mercedes-AMGs due to the packing requirements of its engine.

“Some teams currently run ballast to reach the minimum engine weight and, in accordance with the rules, there are different applications of where that ballast can be,” White explained.

“Effectively when the COG was established in each individual engine (at Winton), if that engine carried ballast, the ballast positioning was simulated on the jig.

“That has been taken into consideration.”

Teams will also have to work around the 750kg minimum front-axle weight while configuring their ballast positions.

That stipulation remains unchanged, much to the disappointment of some teams that continue to struggle to get down to the figure.

Although the performance of the Volvo triggered the centre-of-gravity rule to finally be written 18 months into the Car of the Future’s lifespan, team owner Garry Rogers dismissed suggestions that it could alter the performance of his S60s.

“We’ll do whatever we need to do under the rules and if that means adding or positioning weight on our engine, then so be it,” he told Speedcafe.com.

“All I want is peace and quiet and for everyone to get on with the job.”

Erebus team manager David Stuart added that the impact on the performance of his cars won’t become clear until all the design work is undertaken.

“We’re currently in the process of building a copy of the V8 Supercars rig and will be doing our measurements and understanding where we need to move our ballast,” he told Speedcafe.com.

“Until we’ve done that it’s difficult to know how it’ll effect it, but any time you’re moving weight, it will have some impact. Whether it’s positive or negative for us, we don’t know yet.”

Nissan Motorsport’s Todd Kelly, whose team is one electing not to build its own physical test rig, says that the rule change has required a significant labour investment, but will alter little on-track for the Altimas.

“Because we were under the impression that it would be required for Pukekohe, we hooked in pretty hard with our design team with guys working weekends and nights, everything, to get the parts drawn and manufactured,” he told Speedcafe.com.

“As it turned out there was no way we could do it all for this weekend, but getting onto it that quickly means we should have all the parts for Perth without any issues.

“In our case the design of the ballast is quite intricate because they have to really hug the side of the block, which has a lot of webbing and strengthening on it already.

“It’s a lot of work but the amount it (the centre-of-gravity) needs to move in our case is fairly insignificant, so I wouldn’t expect it to make any noticeable difference in terms of handling or performance.”

Only minor tweaks are expected for most Ford and Holden teams, whose heavier cast-iron blocks and heads have left less scope for ballasting prior to the ruling.