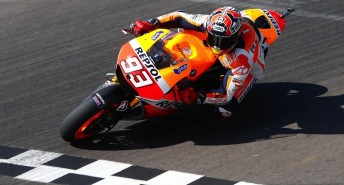 World champion Marc Marquez continued his unbeaten start to the MotoGP season with a stunning fightback from seventh to claim the Grand Prix of Argentina.

The Honda rider dropped to seventh position in the early stages after starting from pole. The 21-year-0ld undeterred by the start managed to haul himself through the field before passing long time leader Jorge Lorenzo to complete the recovery.

Lorenzo was left to settle for third spot behind Marquez’s Honda team-mate Dani Pedrosa who completed a 1-2 finish for Honda.

A third consecutive victory for Marquez has earned the young Spaniard a 19 point lead at the top of the championship standings. He also equalled legendary rider Giacomo Agostini’s record of three consecutive wins from pole at the start of a campaign set in 1971.

It was the Yamaha of Lorenzo that shot into the lead from the start with Andrea Iannone in second and Pedrosa in third.

The tight and twisty nature of the Termas de Rio Hondo circuit played its part in a slow start for Marquez as he dropped to seventh position from pole.

It didn’t take long for Marquez to show his class as he rocketed up to fourth by lap four and a couple of laps later he picked off third placed Valentino Rossi and then Andrea Iannone to move into second.

Meanwhile at the front, Lorenzo had built up a two second lead but the pace of a charging Marquez soon saw the advantage diminish.

The reigning world champion stalked the race leader for several tours before grabbing the lead with eight laps remaining.

Once in front, he opened up a healthy lead and went on to take the chequered flag from Pedrosa, who passed Lorenzo for second on the penultimate lap.

Rossi came home in fourth ahead of Stafan Bradl with Iannone in sixth position.

MotoGP heads to Spain’s Jerez Circuit for Round 4 of the season on May 4.