Porsche keen for a double finish at Spa

Mark Webber and the Porsche Motorsport team are keeping things in-check at this weekend’s second round of the World Endurance Championship at Spa in Belgium this weekend.

Webber along with team-mates Brendan Hartley (NZ) and Timo Bernhard (Germany) finished third on debut for the 919 Hybrid at the 6 Hours of Silverstone just 10 days ago. Webber showed his class at a wet Silverstone in what was his first race in sportscars since 1998.

With the Audi team having both of its cars crash out of the race; they will compete with re-built test cars. While race winners, Toyota, have every reason to feel confident after its dominant performance in the UK. 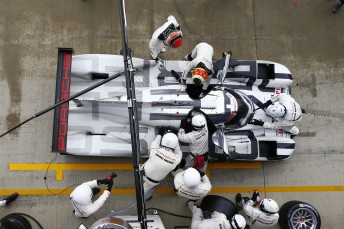 The Porsche crew will face another six hour challenge in Belgium

The technical team behind the 919 Porsche Hybrid have been concentrating on an aerodynamic package suited for the high-speed nature of Le Mans, which will be the next race after Spa. Unlike Silverstone, the Belgium circuit is expected to be more about high-speed efficiency.

“Going to Spa shortly after the first race is good for us to try and continue the momentum,” said Webber.

“The dialogue in the team between all the drivers, the engineers and Weissach (Porsche factory) has been phenomenal when looking for areas where we can keep improving, which is a no brainer as we’ve only done one race.

“There is a bit of excitement in the camp, but we have our feet on the ground. We haven’t had two cars finish yet, so we’d like to do that and get both the no. 14 and no. 20 home.”

The failure of the team’s other entry (no.14) of Romain Dumas (France), Marc Lieb (Germany) and Neel Jani (Switzerland) at Silverstone with damaged front suspension, has the technical team focusing on both cars finishing at Spa.

“But we have to keep our feet on the ground, as there are countless more situations ahead during which we will find ourselves first timers. The second championship round is the dress rehearsal for Le Mans. Our main target for Spa is clearly to finish the race with both Porsche 919 Hybrids.”

The Spa six hours gets underway in the Belgian Ardennes at 2.30pm local time on Saturday.