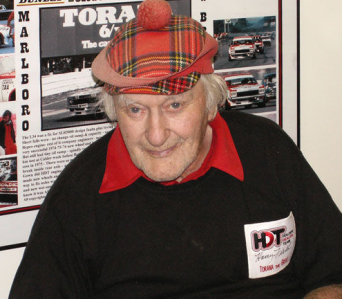 Touring car racing and rallying in Australia during the 1960’s and 1970’s owe a lot to the influence of Harry ‘The Fox’ Firth.

When Firth died, shortly after turning 96, a part of Australian motor racing went to the grave with him.

Firth had made a name for himself in Australia’s formative production/touring car endurance events firstly at Phillip Island where he won the Armstrong 500 with Bob Jane in 1961 and 1962.

When that event was transferred to Mount Panorama for what was the forerunner of today’s Bathurst 1000, he and Jane took honours in 1963.

Jane reflected on how Firth provided him with vital guidance in the early part of his career when he helped write a chapter in domestic motorsport folklore.

“He taught me a great deal about tactics and how to approach things in motor racing,” Jane told Speedcafe.com

“He basically saved my life because I would have killed myself if it wasn’t for his guidance.

“Harry was a dear friend of mine and was a wonderful guy.

“The little Cortina we won Bathurst with cost about $1900 and the only thing we could do to it was give the engine a bit of pep.

“So we had to use our nous and Harry was masterful at that.”

Firth would again win the Bathurst race in 1967, this time with Fred Gibson.

In 1966 he would forge a strong relationship with Allan Moffat, a Canadian who moved to Australia as a teenager and who would return to race in the US in the mid 1960’s.

“Prior to Harry going to Holden in 1969 I asked him to come over to Texas in 1966 to help me with the six-hour race,” Moffat told Speedcafe.com

“We were running two cars and I wanted him to run one and the old boy roared around the Texas track and came second overall against the best Trans-Am people in the show.

“Then we went to Riverside, California, for another SCAA tear-up weekend and he helped me enormously there and acted as the team manager.”

Firth won what was the inaugural Australian Rally Championship in 1968, the same year he led three Ford XR Falcon GTs to the teams’ title in the London-Sydney marathon in what was a remarkable feat.

It showcased Firth’s legendary rat cunning where he lived up to his nickname of ‘The Fox’.

“He did the London-to-Sydney marathon and that was quite phenomenal what he did then with those Falcons. The scale of the challenge logistically was enormous yet he was smart enough to work it out,” Moffat said.

As the person chosen to lead the newly born Holden Dealer Team in 1969, Firth would at the same time supply Peter Brock and Colin Bond their tickets to hugely successful careers.

This was the start of an eight-year run for Firth when he would oversee a period of extraordinary success for Holden.

Among the touring car and rallying scalps commandeered by Firth were Brock’s first Bathurst victory driving a Torana LJ XU1 in 1972.

There were two Sandown wins and the Australian Touring Car Championship titles for Brock (1974) and Bond (1975).

Bond would also show his versatility by bagging Australian Rally Championships in 1971, 1972, and 1974 while Peter Lang would claim the ARC in a Torana in 1973.

While Barry Ferguson and Bond would take the Southern Cross Rally respectively in 1970 and 1971 in Holden Dealer Team Torana GTR XU1s.

During the 1970s while Firth was leading the HDT to considerable circuit and offroad success Moffat was spearheading Ford to significant touring car triumphs.

To outsiders it appeared that Firth and Moffat had become foes when in fact they were quite the opposite.

“Contrary to what people thought when Harry was running the Holden Dealer Team and I was basically running the Ford team I had nothing but high regard for him,” Moffat said.

“I had a strong relationship with him personally but people tended to think that because he was the Holden chief and I was running Fords we had to be arch enemies.

In recent years Moffat and Firth maintained the bond.

“ I’d been down to his place in Hastings (Mornington Peninsula) more than a couple of times and his memorabilia is quite interesting.

“He enjoyed collecting keepsakes and has got a hell of a lot of stuff down there.”

Firth remained as the leader of the HDT until the end of 1977 before jumping in as national scrutineer for CAMS.

He accumulated many awards and decorations through his colourful career including the Order of Australia Medal for services to motorsport, the Australian Sports Medal and CAMS Membership of Honour.

The current V8 Supercars Championship category saw fit to recognise the wily pioneer by inducting him in the Hall Of Fame in 2007.

Speedcafe.com along with legions of motorsport aficionados regrets his passing and passes on our sympathies to his family and friends.