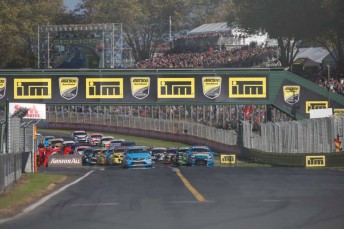 The possibility of a fresh New Zealand V8 Supercars team has emerged amid the category’s hopes to expand its grid size in the coming years.

Backers of the project, which has been dubbed Super Black Racing, attended the weekend’s ITM 500 Auckland.

Interest in the Australian V8 Supercars Championship across the Tasman is currently on a high, with almost 130,000 spectators packing Pukekohe across the four days.

Although boasting three star drivers in Scott McLaughlin, Shane van Gisbergen and Fabian Coulthard, the country has not enjoyed team representation in the championship since David John’s Team Kiwi Racing departed in 2009.

Former V8 Supercars star Paul Radisich is leading the new effort, which is already understood to have held discussions with V8 Supercars about purchasing Racing Entitlements Contracts to enter the championship.

The RECs have yet to be put to tender, where they could be purchased by new or existing teams, or absorbed by V8 Supercars itself.

While details of the Super Black project are yet to be announced, V8 Supercars CEO James Warburton confirmed to Speedcafe.com that the category has been fielding enquiries from new teams that could see the grid expand beyond 25 cars.

That category has also been enjoying widely publicised dialogue with American outfit Penske Racing, which is expected to make a decision on its plans following next month’s Indianapolis 500.

“The enquiry has been relatively strong in terms of people looking to procure RECs,” said Warburton.

“The Board determined that we wouldn’t go through the tender process (yet) on the basis that 2014 was going to be another tough year.

“As things improve dramatically as we get into next year, obviously with the media deal and other things going on, we’ll go through that tendering process and make some final determinations.”

“I don’t think it (the decreased car count) has hurt us, but of course we’re going to want more,” he said.

“Is the right number 24, 26, 28? We’ll make those determinations as a Board and make some decisions around that.”