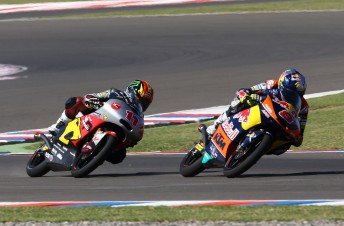 Australian Jack Miller continues to lead the Moto3 title race despite controversially missing out on a third consecutive victory in Argentina.

The young Queenslander, who started from pole, was leading into the penultimate corner  at the Termas de Rio Hondo circuit only to be relegated to third at the chequered flag after being hit by eventual race winner Romano Fenati.

The incident was investigated by race stewards after the race with officials electing not to issue Fenati with a penalty which would affect the race result. Instead, the Italian was awarded one penalty point for ‘irresponsible riding causing danger to other competitors’.

“Overall I’m happy with the race, we have done our best, and I’m sure that if I hadn’t been hit I would have won the race,” said Miller

“Anyway, we scored more points in the standings, so that is positive.”

“My strategy on the penultimate lap was to let Alex Marquez pass, but I also let Fenati by. It didn’t upset me because on the last lap I could take advantage of the slipstream of two bikes on the back straight.

“I made the move to overtake them but I didn’t manage to get by Marquez and I had to pass him in the next corner.

“In the second to last corner I had the inside and was about to accelerate and I was hit from behind. I went into the dirty area of the track but was able to save the podium position.”

Although disappointed to miss out on a third win of the season, Miller continues to hold a 17 point lead at the top of the Moto3 championship standings ahead of Round 4 at Spain’s Jerez circuit on May 4.