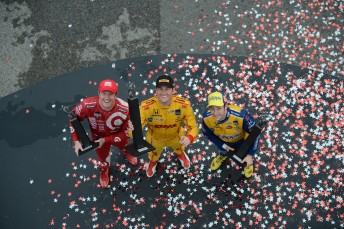 Ryan Hunter-Reay has taken his second successive victory in the Honda Indy Grand Prix of Alabama.

In a race which saw a rain delay of more than two hours from the scheduled start, Hunter-Reay claimed a 1s win at the Barber Motorsports track.

His team-mate Marco Andretti was second as the race finished under caution ahead of reigning IndyCar series champ Scott Dixon in third.

Andretti had seized the opportunity after a mistake by polesitter Will Power on lap 16 when the #12 Penske speared off the track.

Power eventually finished fifth behind Simon Pagenaud and by doing so, holds onto the series lead.

The other Australian Ryan Briscoe finished 11th three spots behind the St Petersburg winner Mike Conway who did the best he could from his rearward grid spot.

Other incidents in the race involved the other two Penske drivers Juan Pablo Montoya who was trekking just behind the leaders early on before he spun off the track and was eventually classified in 21st, a lap down.

Team-mate Helio Castroneves was the last of the finishers on the lead lap in 19th with his race soured by a stop-go penalty after mistaking Justin Wilson’s pit box for the Penske area.

See below for championship points