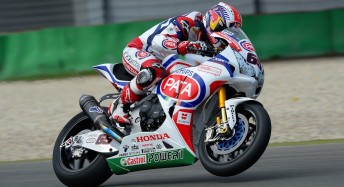 The Northern Irishman made no mistakes in tricky wet conditions to score his fifth World Superbike win at the Dutch venue, in a race which was delayed by two hours due to heavy rain.

After lengthy delay from its original start time, Rea grabbed the lead at the first corner and never looked back.

The Honda rider cruised to the chequered flag ahead of Suzuki’s Alex Lowes, who scythed his way through the field from ninth on the grid.

An off from Marco Melandri on the penultimate lap handed Ducati’s Davide Giugliano secured the final spot on the podium.

Aprilia’s Sylvain Guintoli, who fell in the early stages, managed to recover to finish ninth. The Frenchman recorded victory in race one rather fortuitously after the encounter was red flagged with Sykes hot on his heels.

Guintoli led from the start and had built up a lead of four second before Sykes began to charge up through the field.

The reigning world champion quickly dispatched team-mate Loris Baz and then Rea before he reeled in Guintoli.

However, an engine failure for Geoff May triggered a red flag and with enough of the race completed for a result to be declared, Guntoli claimed the victory.

In the end, Sykes settled for second ahead of Rea in third while polesitter Baz finished fourth.