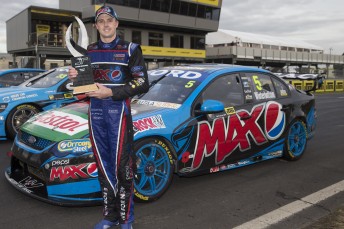 Winterbottom with the Jason Richards Trophy

Mark Winterbottom became the second winner of the Jason Richards Trophy after beating Scott McLaughlin to the Race 13 win at Pukekohe.

The #5 FPR Falcon was the class of the field in the 200km race, eventually greeting the chequered flag seven seconds ahead of the pole-sitting Volvo.

Running fourth in the early stages, Winterbottom cleared team-mate David Reynolds in the first stint before taking second from Shane van Gisbergen in the pits.

The championship leader then stalked early pacesetter McLaughlin through the middle stint before they pitted together with little over 25 laps remaining.

Emerging from his pit box in the lead, Winterbottom was never troubled thereafter on the way to his third win of the season.

“I made a bit of a bodgy start and the crew did a great job with the pit strategy.

“We really trucked on and to come away with a 100 point lead is fantastic.

“After taking the points lead last night I wanted to hold onto it heading away from this weekend. I’m rapt!”

“It’s amazing to win the Jason Richards Trophy – that’s the cool part of what we have achieved this weekend,” he added.

“He was a very special guy and I feel honoured to have won it.”

Chaz Mostert added to another strong day for FPR with a third place finish; his second podium in two days.

It was a tough afternoon for Whincup’s team-mate Craig Lowndes. Starting from 18th, the #888 Holden joined Davison’s Mercedes in making its first stop on the opening lap.

Unlike Davison, Lowndes struggled for pace all day, however, eventually finishing 20th.

Second-placed qualifier Tim Slade was one place further back in 21st at the end of the race after a clutch problem on the grid forced a pitlane start.

Todd Kelly finished at the bottom of the order after a drive-through for pitlane speeding.

Also in the wars was David Reynolds, who was leading on the road in a net fourth place when he suffered a left-rear tyre failure at the end of his second stint.

The Bottle-O Falcon driver was 17th at the flag.