Tekno in no rush for two-car expansion

Tekno in no rush for two-car expansion 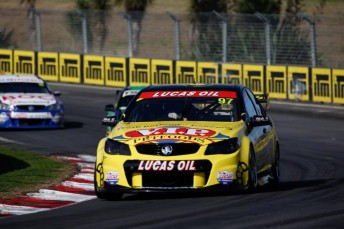 Tekno Autosports must cement itself as a viable commercial entity before a return to a two-car structure can be seriously entertained, says owner Jonathon Webb.

Webb this year stepped back from driving as part of the downsizing to a single entry, run for Kiwi star Shane van Gisbergen.

While the Triple Eight-aligned team is proving a winning force in its new guise, Webb is firmly focussed on improving its off-track outlook.

The Webb family has invested heavily in the team since its was formed for the 2011 season, running for much of the intervening years with limited or cut-price commercial support.

The squad took a positive step forward in the lead-up to Pukekohe by signing American lubricant firm Lucas Oils to a multi-year minor sponsorship deal.

More such agreements must be struck, says Webb, in order to establish the team as a secure business in its own right.

“At the moment our focus is to get Shane’s car up to where it needs to be (commercially),” Webb told Speedcafe.com when asked of his team’s interest in expanding back to two cars.

“It’s still got plenty of empty spaces on it, so we need to fill that up and get it to a stage where it can stand on its own two feet and where this business as Tekno is a standalone business.

“It doesn’t even have to make money, but at least break even on itself, rather than having to feed off the family.

“I’m 30 now, I’ve got my first kid and I want to take on the responsibilities and do it myself. If it (the V8 Supercars team) is a business that can do that (at least break even) then we’ll keep pushing on and keep doing it.

“We’re heading in the right direction to do that, and I think V8s is doing a better job then it has in the last couple of years to give us a product that we can sell as well.

“If we can fill-up #97 and get that to a comfortable level, and then we’ll look at doing something else (with a second car).”

Webb believes that stepping out of the driver’s seat has helped change the perception in the paddock of what Tekno is about.

The move coincided with wife Kobe moving away from her day-to-day Tekno duties in order to raise the pair’s first child, and Jonathon’s father Steve electing to attend less races.

Jonathon himself was absent from the last three events following the recent birth of his son, leaving high-profile off-season recruit Steve Hallam to steer the ship.

“The biggest thing for me, speaking to Steve when he came on board, is to bring us from a little family run race team up to a business that can succeed in the business world,” Webb continued.

“That’s what V8 Supercars is now. It’s not a hobby or just a bit of fun for me to drive a race car. There’s way too much time, energy and money involved in it.

“If I wanted to have a play I’d spend a couple of hundred grand in Carrera Cup and just enjoy it.

“The intention of this was always to build something that was bigger than that, with which we could do exactly what we’re doing now. That’s winning races and fighting for a championship.

“It’s been pretty bad timing to be starting a new race team when you look at what’s happened with V8 Supercars and the economy over the last few years.

“There’s no the big dollars out there that there were a few years ago, but it’s turning around. We’ve done the hard work and been through the hardships in the last couple of years.

“The light at the end of the tunnel is certainly starting to appear. Everyone in pitlane is working hard to rebuild V8 Supercars and return it to the powerhouse that it was.”

After an aborted attempt to drive elsewhere, Webb will be back behind the wheel of Tekno’s Holden in the endurance races, beginning in September.

While looking forward to his competitive return, the 30-year-old insists he’s pleased to have sat the opening part of the season out.

“There’s no doubt that the day before Adelaide, I was massively relieved that I wasn’t driving a race car,” he said.

“I just wasn’t in a mind space to be driving with everything that had gone on over the break to get the race and road car business where we need them to be.

“I’m looking forward to the enduros and getting back in the car. Hopefully I can show that I have earned my place here (as a driver on the V8 Supercars grid) and haven’t just paid for it.”

Van Gisbergen won Saturday’s Race 12 of the championship at Pukekohe and leads the meeting points for the Jason Richards Trophy heading into today’s 200km event finale.