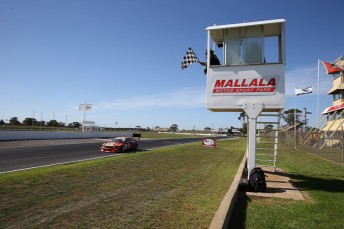 Kerrick Sports Sedan Series racer Tony Ricciardello has won both of the series’ marquee trophies taking the Clem Smith Cup and the Des Wall Memorial Trophy at Mallala today for round two of the Shannons Nationals.

Ricciardello and his famous Chevrolet powered Alfa Romeo GTV scored a record fourth victory in the biggest Sports Sedan race of the year, before later doing the job to score the Des Wall Trophy in race three – recognising the efforts of a long-time Sports Sedan hero.

The Alfa Romeo-Chev driver and his long-time rival Darren Hossack staged another epic battle for the Clem Smith Cup trophy, named after the long-time Mallala circuit owner and promoter.

Hossack led the race early before Ricciardello battled his way past and then held on to secure the win in the series’ biggest race of the year, with Hossack second and Calibra-Chev driver Steven Tamasi third – mirroring the ultimate round results.

“This has been a pretty bad circuit for us the last few years, so (to win the Clem Smith Cup) is pretty good for the guys, it is a good start for the year to come here and have a good win,” Ricciardello said.

“Clem is pretty old, he has broken ribs and he is still turning up at the track; he even passed me on the highway back to Adelaide last night so he still has that racing spirit – that strength he has got to keep racing is admirable, it is an honour to win it.

Ricciardello continues to thrive on the competition at the pointy end of the Sports Sedan field as he searches for his eighth title this year. 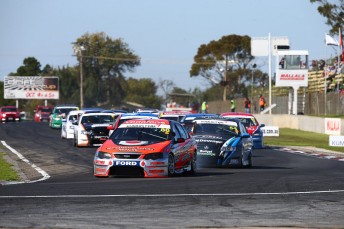 Ryan Simpson continued his domination of the Kumho Tyres Australian V8 Touring Cars Series, sweeping both races today en route to victory in the opening round of the 2014 series.

Simpson headed home Eggleston Motorsport Commodore driver Justin Ruggier and Falcon driver Matt Chahda in each of Sunday’s races and will head to the second round of the series with a 20-point series lead thanks to his clean sweep at Mallala.

Simpson also set a new lap record for the class in his comprehensive overall weekend performance.

Victorian teenager James Golding won the opening round of the 2014 Australian Formula Ford series, dominating the weekend to win all three races and leave with the new Mallala lap record.

Golding held out Hamish Hardeman in a one-lap dash to the flag in race two, before being forced to work hard for the clean sweep when Queenslander Jordan Lloyd made the best start in race three and led the early laps.

The pair ran closely and battled for the lead until lap eight, when Golding took the lead and, ultimately, the race and round win.

I’Anson was in top form today as race one winner James Winslow struck dramas; failing to finish both races.

The variety in the field was showcased on the outright podium with round winner I’Anson driving a West, second-placed Adam Proctor a Stohr and third-placed Mark Short driving a Prince Sports Racer.

Victorian Gavin Ross won the second round of the Dial Before You Dig Australian Saloon Car Series in a weekend where three different drivers won the three races.

Ross won race one and finished second in races two and three to take the round: Kane Baxter-Smith and Shawn Jaimeson taking the additional race victories. Ross won the round from Baxter-Smith and Luke Westall.

The next round of the Shannons Australian Motor Racing Nationals will be held at Phillip Island on May 23-25.