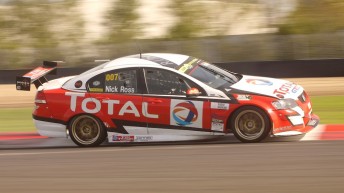 The Holden driver from Cambridge finished fourth and second in Sunday’s two encounters while Bargwanna guided his Toyota Camry to a double victory.

However, Ross only needed to finish the final race of the season to secure the title, after winning the weekend’s opening two races, while mechanical issues saw his rival fail to score.

As a result, Ross claimed his first NZV8 title after 12 year quest with a relatively easy drive.

“I’m really happy to get the title after all this time, it’s been 12 years.” said Ross.

Ross will begin next season in a brand new Nissan Altima TLX car.

In the NZV8 Touring Cars TL class, Hamilton’s Ian Booth wrapped up the title with a race to spare after rival James McLaughlin struggled.

Meanwhile, the second race of the day was interrupted by a four-car incident at turn one, involving Stephen Taylor, Grant Molloy, Liam MacDonald and Brad Lathrope.

The incident which brought out the Safety Car occurred after an overlap between Molloy and McDonald sent both cars off the track, with the pair collecting Taylor and Lathrope on their way.

Although MacDonald escaped the clash with only panel damage, Molloy, Taylor and Lathrope suffered DNFs.

In other support action at the ITM 500 Auckland, Kris Walton maintained his lead in the NZV8 Utes series after recording victory in the final race of the weekend.

The next race on the NZV8 Utes series commences September 6 at Taupo.