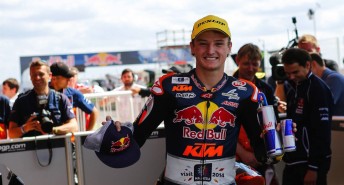 The Queenslander had topped the times in every session at the Termas de Rio Hondo circuit prior to qualifying where he proved to be the class of the field yet again.

Miller was pushed hard by title rival Efren Vasquez during the session but in the end the Aussie’s 1.49.200s effort scooped a second pole of the season by 0.052s.

Danny Kent was third fastest a full four tenths of a second adrift of Miler’s time.

“It’s been a good day; we are happy with how the bike is working,” said Miller

“We have done a good job and we have a really good setup for the race. I have a lot of confidence in the bike and think that the tyres will hold up for the distance.”

The championship leader will aim to convert the pole position into his third victory of the campaign to further extend his lead in the Moto3 title race.