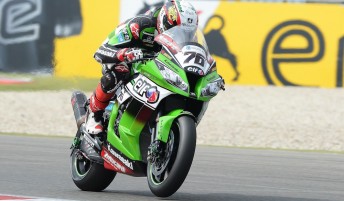 The Frenchman timed his final run to perfection as he shaved six tenths of a second from the Dutch circuit’s lap record, previously set by Jonathan Rea in 2010.

Fellow countryman Sylvain Guintoli proved to be his nearest rival trailing the Kawasaki rider by 0.488 seconds.

Baz signalled his intent by grabbing provisional pole early in the session only to be surpassed by Guintoli with just eight minutes remaining.

However, the threat of rain forced the Kawasaki rider back out onto the circuit where he produced a stunning ride to post a record breaking 1.34.357s effort, shortly before spots of rain began to fall.

The weather conditions deterred riders, including Guintoli and Sykes, from trying to improve upon their times leaving Baz to enjoy his first pole position.

Aprilia’s Marco Melandri will head up row two in fourth ahead of PATA Honda’s Rea and Ducati’s Davide Giugliano.

Niccolo Canepa produced arguably the surprise of the session as the Italian secured seventh spot ahead of the Suzuki’s of Eugene Laverty and Alex Lowes.

Toni Elias rounded out the top 10 on the Red Devils Roma Aprilia.