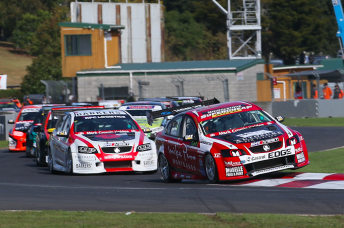 The 22-year-old charged through the field to challenge Murphy for the lead on lap 10 of Race 4, only to lose first position on the following lap.

A dive at turn four of the circuit then saw Moore secure the inside line down the back straight, holding the race lead over the championship winner for good.

Moore said he knew the victorious move on his “childhood hero” would be received well by the champion, while it induced a supportive roar from the crowd.

“I just thought, what the hell, I’m here, the car is good, I’m a little bit further behind than I’d like to be but I may as well just throw it down,” Moore told Speedcafe.com, having secured third in the final championship standings with the result.

“I knew that if I throw it down and he sees me coming he will give me enough room so we can both run side by side.

“I don’t even have the words to describe that sort of reaction, but hopefully I can do it more often and make it a regular thing.”

Winner of the opening three races, Murphy took second in the knowledge that he had already secured the championship on Saturday.

He later downplayed his domination of the series against a field of largely less expereinced competitors.

“We have won a lot of the races this year, but it hasn’t been as easy as it looked,” he told Speedcafe.com.

“I suppose I’m the benchmark for some of the guys to reach. I think I’m just setting the standard in the category.”

Ant Pederson, a title contender coming into the weekend, maintained a strong finish to the 2014 series, tying up fourth place after crossing the line in fifth and fourth in races three and four respectively.

Andre Heimgartner’s grip on second in the championship was removed after leaking fluid from his #22 entry spun the car around at turn eight in the first race lead to DNFs in both races.

The young Kiwi’s demise saw the first race finish under Safety Car, while it returned in race two after Mitch Cunningham tapped Angus Fogg at turn eight, spearing Fogg off into the gravel trap.

The 2015 BNT V8 SuperTourer season will kick off this September with the first of the endurance rounds at Taupo.​