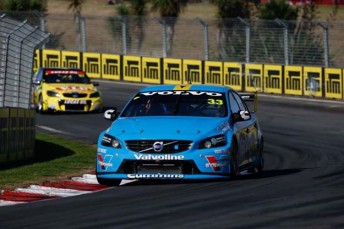 Local hero Scott McLaughlin will line-up from pole position for the fourth and final race of the weekend at the ITM 500 Auckland.

The #33 Volvo set the three fastest times of the 20 minute session to back-up his pole effort from yesterday’s Race 12 session.

McLaughlin ended each of his three runs at the top of the order before leaving his final benchmark at 1:02.99s.

An error from Craig Lowndes that put his Red Bull Holden in the gravel a the hairpin with just a minute remaining failed to upset the late flurry of fast times after Race Control elected against flying the red flags.

Tim Slade made the most of the opportunity, shooting to second ahead of fellow late-improvers Shane van Gisbergen and Mark Winterbottom.

Chaz Mostert’s best was good enough for fifth in the final reckoning ahead of David Reynolds in the third of the FPR Falcons.

The Nissans of Michael Caruso, Todd Kelly and Rick Kelly were seventh, ninth and 10th respectively, split only by Jamie Whincup’s Holden.

Lowndes dropped to 15th over the final minutes; able to keep his time due to the lack of red flag

Race 13 will take place over 200km and decide the winner of the weekend’s Jason Richards Trophy.

Winterbottom now leads the Trophy standings from Courtney and Van Gisbergen after the Tekno Holden driver’s points penalty for contact with Jason Bright in Race 11.

The 25 points had initially only be taken from Van Gisbergen’s championship tally, but have now also been removed from the weekend’s standings.