Ambrose in punch-up at Richmond

Ambrose in punch-up at Richmond 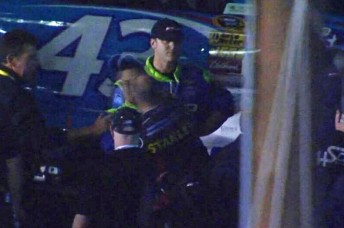 Ambrose and Mears come to blows at Richmond

Marcos Ambrose and Casey Mears have come to blows after a tension-filled Toyota Owners 400 at Richmond International Raceway.

The race was won by Joey Logano after a late move to beat home Jeff Gordon in a battle that also included Kyle Busch, Brad Keselowski and Matt Kenseth.

Ambrose crossed the line in 18th position one place in front of Mears, but in what appeared to be a heated discussion in the garage area after the race words soon turned to fists as crews pulled the two combatants apart.

In an at times tough race for Ambrose, the Tasmanian battled from being blocked at least twice on pit road by Austin Dillon to claw his way back towards the top-10. After having Denny Hamlin spin in front of him with 24 laps to run, he took four tyres and battled through to the finish.

While the two could have been discussing contact from the final stages of the race, they also made rubbed panels on track earlier in the race as Ambrose had to make an impressive save from spinning his car.

Both drivers have been called to front NASCAR officials over the incident, although Robin Pemberton the vice president for competition of NASCAR has said the following “We don’t think that it was anything too severe.”

Up front Logano led a total of 46 laps, but none were more important than the final four after coming from fourth place when Kenseth tried to hold out Keselowski and Gordon. As the first three battled each other, Logano found a gap down low and went on to take the chequered flag.

The action on the track was on from the outset when Clint Bowyer turned pole sitter Kyle Larson on the very first turn.

Bowyer would go onto have other dramas when he along with Cole Whitt and Reed Sorenson, all suffered fires in the front-right wheel well as tyres came apart and the rubber wrapped around the brake assemblies. 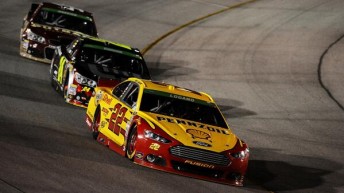 Joey Logano won his second race of the year

No such issues for Logano who scored his second win of the season after taking victory at Texas just two races ago.

“Yeah it was a wild finish. It just came down to really a four way battle and we had a great car for the short runs and we got up there challenging for the lead,” Said Logano.

“It came together at the end for us to have a shot at it and we just got ran off the race track but that is racing and we will move on.

“I had enough room to turn up underneath him and get enough clean air on the car to take off. This isn’t a very good race track for me in the past but we had a really good Shell Pennzoil Ford today and we were able to put it in victory lane.

“This is so cool to win two races already this season and it is just going to be one heck of a season and I can’t wait to get to the race track next week.”