Ambrose/Mears fight to be reviewed by NASCAR

Ambrose/Mears fight to be reviewed by NASCAR 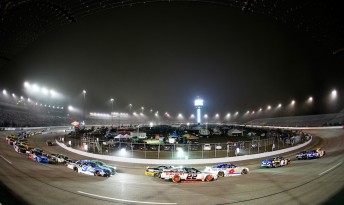 NASCAR will review footage of the ugly scene between Marcos Ambrose and Casey Mears following the Toyota Owners 400 at Richmond.

Mears was seen to be pushing and shoving Ambrose in the back which prompted the Richard Petty Motorsports driver to retaliate by landing a right hook before crew members stepped in to separate the pair.

Both drivers immediately left the track, according to RPM and Mears’ Germain Racing team.

NASCAR Vice President of Competition Robin Pemberton said he hadn’t had chance to speak to either driver.

“We’re just taking a look at it. … looking at the video and it doesn’t seem to be much, but we’ll take our time Monday and Tuesday and look at it some more,” Pemberton said.

“We’ll get all the footage we can and look at it and see what happens from there.

“There might be more to it than that (a punch) so we have to take our time and look at everything.

“Sometimes there’s things out there for us to look at that we don’t have available right now, so to make any statement or call on it right now would be a waste of everybody’s time.

“It was good hard racing tonight and probably some of the best racing we’ve seen at Richmond. A lot went into it, a lot of good lead changes and people were being aggressive and that’s what people like to see, good hard racing.”

NASCAR is also set to investigate a punch thrown by one of Mears’ crew members which collected Ambrose during the scuffle.

Mears finished in 19th position, one place behind Ambrose who had started the Richmond race in 11th position after qualifying was washed out.

There has been no reaction publicly by either driver other than a tweet from Mears which read: “Had a good car tonight. Proud of the GEICO Racing team. Interesting end to the night. #13.”